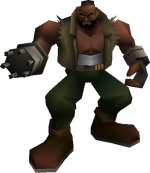 Barret is a playable character in Final Fantasy VII. He is the first party member to join Cloud, accompanying him after Cloud's first battle at the beginning of the game. He is a ranged attacker, using a machine gun mounted in place of his amputated arm. He is strong and a good physical attacker. He is a date option for Cloud in a scene in Gold Saucer, but his scene is he hardest to get.

Barret joins the party at level 6. Barret wields various gun-arms for long range attacks—which makes him a good character to keep in the back row, as he still deals full damage. His gun-arms have average power, and his strongest, the Missing Score, does more damage the more AP the player stocks it with. Due to his high Defense and good placement in the back row, he can be a good candidate to wearing the Cover Materia.

Barret has high HP and Defense, but poor Magic and Spirit. Barret has the lowest Dexterity and MP out of all the party members and the second highest Strength stat next to Cloud.

Barret's weapons are mostly long-range, allowing him to fire from the back row, with the exception of a few that are melee range.

His ultimate weapon, the Missing Score, does more damage the more AP the player stocks it with. With enough mastered Materia, Barret can easily hit for 9,999 damage with every attack. It is even possible to overflow the damage if the weapon is filled with mastered Knights of the Round Materia.

Barret's Limit Breaks consist mainly of physical blows, although one of them attacks the target's MP rather than HP: Mindblow. If the player is keen in their leveling, Barret can learn his level 2 technique Hammer Blow early, making it useful for dispatching enemies instantly.

In Final Fantasy VII: Advent Children, during the battle with Bahamut SIN, Barret's gun-arm takes on a green glow before firing a large, round blast of energy at the summon. This may be either Big Shot or Mindblow, though it is difficult to tell which; the energy blast Barret fires is green, while Big Shot and Mindblow are orange and blue, respectively.

The party member who takes Cloud Strife on a date during the party's second plot-related visit to Gold Saucer is decided by a hidden value in the game determined by the player's dialogue and party member choices. Depending on the player's choices, Cloud may go on a date with Aeris, Tifa, Yuffie, or even Barret. Barret starts with no points compared to Aeris's 50, Tifa's 30 and Yuffie's 10, meaning the player must deliberately lower the latters' and boost the former's to get the "date" with Barret.