Missing Score
Barret is a playable character in Final Fantasy VII. He is the first party member to join Cloud, accompanying him after Cloud's first battle at the beginning of the game. He is a ranged attacker, using a machine gun mounted in place of his amputated arm. He is a strong physical attacker early on, though due to his ultimate weapon Missing Score, whose damage depends on the AP of equipped Materia, he is later best built towards magical damage. Barret's ultimate weapon can also achieve the overflow glitch.

Barret is the hardest date option to get for Cloud in a scene in Gold Saucer.

Barret wields various gun-arms, most of which do long range attacks. While he is using long range attacks, he is a good character to keep in the back row, as he still deals full damage. Due to his high Defense and good placement in the back row, he can be a good candidate to wear the Cover Materia. His gun-arms have average power, and his strongest, the Missing Score, does more damage the more AP the player stocks it with.

Barret joins the party at level 6. Barret has high HP and Defense, but poor Magic and Spirit. Barret has the lowest Dexterity and MP out of all the party members and the second highest Strength stat next to Cloud.

Barret begins with the Gatling Gun, which has a single Materia slot and cannot be sold, as well as the Bronze Bangle. The weapon can soon be replaced with the Assault Gun.

His ultimate weapon, the Missing Score, does more damage the more AP the player stocks it with. With enough mastered Materia, Barret can easily hit for 9,999 damage with every attack. It is even possible to overflow the damage if the weapon is filled with a mastered Knights of Round Materia. Though this weapon requires a huge investment to reach its full potential, at its best it is more powerful than what most characters are capable of.

Barret's Limit Breaks consist mainly of physical blows, although Mindblow attacks the target's MP rather than HP. If the player is keen in their leveling, Barret can learn his level 2 technique Hammer Blow early, making it useful for dispatching enemies instantly. Barret's level 3 and later Limit abilities, with the exception of Hammer Blow, can hit all enemies. Hammer Blow targets a single enemy, but causes Instant Death if they are not immune.

Barret's ultimate Limit Break is Catastrophe, which hits ten times at random enemies for 1.25 times normal damage. Though this is a very powerful ability, Angermax, which hits 18 times for half damage each, can potentially be more powerful. If Barret equips the Missing Score with sufficient AP, he can hit 18 hits for 9999 damage each, dealing more damage than any other character is capable of.

In Final Fantasy VII: Advent Children, during the battle with Bahamut SIN, Barret's gun-arm takes on a green glow before firing a large, round blast of energy at the summon. This may be either Big Shot or Mindblow, though it is difficult to tell which; the energy blast Barret fires is green, while Big Shot and Mindblow are orange and blue, respectively.

Barret joins without any Materia equipped. Barret early on is focused more towards physical damage, and because of his ranged weapon, does not require spells in the early portion of the game to hit enemies from a distance. He can be a suitable candidate for Restore, however, to save other characters a spare slot.

As Barret levels up, he becomes a better candidate for equipping Magic Materia and Summon Materia, because many of his later weapons have a larger number of Materia slots, and equipping many can improve his Magic stat and make him a better spellcaster. Additionally, his high HP means that equipping more Magic and Summon Materia is less detrimental to him than others. Nonetheless, Barret still has a fairly high Strength stat, and can still be geared towards physical damage and given Command Materia and Independent Materia to benefit him. The Cover Materia, particularly, is useful for Barret because he can remain in the back row while wielding a ranged weapon; paired with Counter Attack, this can allow Barret to effectively intercept attacks and respond with his own damage.

Once Barret obtains Missing Score, he transitions fully towards a spellcaster character due to its mechanics that deal damage based on the AP of the Materia slots on his weapon. This means it is best to equip a large number of mastered Magic and Summon Materia, especially ones that can store a lot of AP, giving him access to a wide variety of spells, improving his Magic stat, while not being detrimental to his physical damage. Equipping multiple mastered Knights of Round Materia at this point is an easy way to improve his physical damage.

Barret joins the party in the very first chapter, "No. 1 Reactor Bombing", and is a mainstay of the party throughout the first act, "Banner of Revolution", which takes place in Midgar. In this act, Barret stays in the party until "The Woman at the Church", before rejoining at the end of "Prevent the Fall of the Plate". He remains in the party lineup until the battle with Sample:H0512 battle where or Tifa can be chosen as the third party member. He returns to party lineup in Aeris's party when heading for the lift in Shinra Building. From the Motor Ball fight and onwards, Barret is a permanently available party member who can optionally be used in the party at any point.

Barret leaves the party when the player enters the Gold Saucer. Once he is reunited with in Corel Prison, he is a required party member until encountering Dyne, where he is the only participant in battle. He returns to being an optional party member after this.

The chest containing Missing Score will not appear in the unrevisitable section of Midgar unless Barret is in the party. 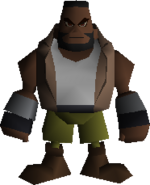 Barret in a sailor outfit.

The party member who takes Cloud Strife on a date during the party's second plot-related visit to Gold Saucer is decided by a hidden value in the game determined by the player's dialogue and party member choices. Depending on the player's choices, Cloud may go on a date with Aeris, Tifa, Yuffie, or Barret. Barret starts with no points compared to Aeris's 50, Tifa's 30 and Yuffie's 10, meaning the player must deliberately lower the latters' and boost the former's to get the "date" with Barret.

If the party Cloud chooses when exiting Midgar features Aeris and Tifa, Barret will comment that he expected Cloud to make this choice.[1]

In Costa del Sol, if Barret is not in the party, then the player can find him in the bathroom of the inn, posing in his sailor's uniform from the Cargo Ship (as a result of hearing Tifa and Aeris's remarks of how attractive he looked while wearing it). The door will be locked since he does not want anyone to see him doing this.

When first entering North Corel, if Barret is in the party he has a small interaction with a town member before walking ahead of the party. If he is not in the party this is skipped and Barret is already engaged in the following scene. One townsman also says a different line in the version where Barret is seen with the rest of the party. After the scene, if he is in the party he will say some dialogue and rejoin Cloud. If he is not in the party, the player will have to interact with him for the next dialogue then he will run off (or exit and reenter the screen to skip it).

If Barret is in the party when saving North Corel for the Huge Materia mission, he will have an additional interaction with a townsperson.

When finding Cloud in Mideel, Barret has an additional interaction with Tifa if he is in the party, asking if Cloud is really her friend.

An additional scene occurs after entering the Submarine if Barret is in the party. He calls back to his first line to Cloud at the start of the game, and remarks on how things have changed since he was the leader.