Unleash 4 attacks with the emphasis on speed. Each strike inflicts half the usual damage.

Barrage (乱れ撃ち or みだれうち, Midare Uchi?), also known as Sshot, Shot, Rapid Fire, X Fight or X-Fight is a recurring ability in the Final Fantasy series. Barrage usually allows a character to perform a physical attack more than once each turn and is usually connected to the Ranger job class, and the Gunner job class in later games in the series. In some games, it is the upgraded form of Double Attack.

Barrage is the command ability of the Ranger job class in the 3D version, which allows the user to attack a random enemy four times.

Each damage done is equal to the following:

The Factor is as follows:

Perform four weaker attacks at once.

Rapid Fire is the level 4 ability for the Ranger job, learned for 405 ABP. It hits four random targets at half damage, each hit ignoring defense and evasion. If used with Dual Wield it will hit eight times in succession.

This can be combined with Spellblade despite the four attacks looking normal, lending to tactics for high damage with the right weapon (such as Excalibur or a no-run Brave Blade) and Flare. Rapid Fire does not dispel Confuse, Sleep, or Control, will not provoke counters, and any Added Abilities from weapons will not be activated.

Rapid Fire is the Added Ability of the Hayate Bow.

The command does not receive a new name and remains named as Attack. In the SNES version, its description reads; "Changes Fight into X Fight". The description of the Master's Scroll was altered in the subsequent releases. The Master's Scroll relic (known as the Offering in the SNES version) allows the character to attack random targets four times, with half the attack power of a regular attack. Coupled with the Genji Glove relic, the user can attack eight times in succession. When attacking with the Master's Scroll, added abilities (including auto-criticals) will be disabled for most weapons, unless the wearer wields the Kazekiri, Hawkeye or Sniper .

General Leo has a Master's Scroll permanently equipped on him, giving him the X Fight command.

A leveled up Double Cut Materia replaces an ordinary 2x-Cut command with the 4x-Cut command. 4x-Cut attacks random targets four times consecutively, and deals the same damage from back row as from the front row.

Barrage is a Ranger ability, available starting at level 30 and allows a ranger to output a lot of damage quickly. The ability can be used once every five minutes, and will randomly select a number of arrows between two and six and shoot them all together. This can further be boosted by Hunter's Bracers +1 (+1 shot) and/or Desultor Tassets that have been augmented with "Barrage+1". The ability creates a lot of enmity if all the hits are successful. It is, however, a useful ability for Rangers to have in order to build TP quickly.

Fran learns Barrage at level 45, which launches successive attacks on an opponent. Its power can be upgraded by equipping the Dueling Mask accessory, which gives the Hunter's Monograph bonus.

Balthier has a similar ability called Tri-Shot, which attacks a single enemy three times. Rapid Fire is a separate ability from Barrage, and is a support ability for Balthier that reduces the time between his attacks.

Barrage is a level 38 Archer ability that triples the number of strikes for a single-target weaponskill. It is instantly cast but has an 80 second cooldown. The Barrage effect lasts for 10 seconds.

In the War of the Lions version, Balthier's Sky Pirate job has the ability Barrage, which costs 1,200 JP. It lets Balthier attack an enemy four times in a row, each shot dealing half damage.

Barrage is the job level 6 support ability for the Hawkeye. The damage the user deal will rise with the number of offensive actions taken in a given turn. For each damage-dealing action performed, damage from subsequent actions will be multiplied by a factor of 1.1. If an attack fails to deal damage, no bonuses will be applied. It costs 1 slot.

Spreadshot is the final ability of the Ranger class, learned for 650 AP. At the cost of 19 MP, the user will attack four times, choosing a target at random.

Rapid Fight I-III appear as abilities and can only be used by a character if they are equipped with either a Garuda or Ifrit Phantom Stone that possesses the ability. When used, the ability allows the user to attack four times to random targets.

Bartz's EX Burst is Spellblade - Dual Wield - Rapid Fire, based on a set-up of abilities from Final Fantasy V. The attack launches eight strikes against the opponent, after which Bartz forms the Brave Blade and performs a devastating final blow.

Rapid Fire is the enemy ability that is used by the Black Knight during battle.

Barrage is a five-star ability that enables a character to hit four random targets, with each hit dealing 70% of a standard attack by that character. As it cannot be aimed at a specific character, it cannot be used to exploit the retaliate strategy. It is able to be crafted using 10 Major Power Orbs, 6 Major Earth Orbs, and 6 Major Wind Orbs.

In lieu of Bartz's appearance in the Dissidia series, his special attack remains Spellblade - Dual Wield - Rapid Fire, based on a set-up of abilities from Final Fantasy V.

Barrage is an active ability which allows the caster to attack and deal physical damage (3.2x) four times to random enemies. Its cost is 16 MP and can be learned by Artemios, Chizuru and Cloud of Darkness, all at level 80 (5★). Bartz and Delita learn Barrage at level 78 and 58 (5★), respectively. Barrage also is Luna's Trust Master reward.

Barrage is particularly recommended due to its usefulness in the Arena, where Area-of-Effect attacks are favored, or against bosses. Combining Barrage with the passive Dual Wield is also good strategy, as instead of four hits, the caster will attack eight times. 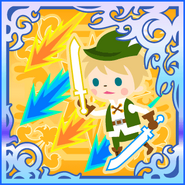 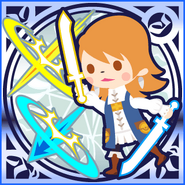 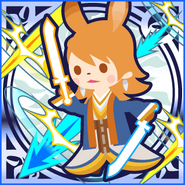 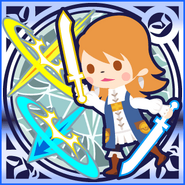 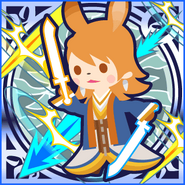 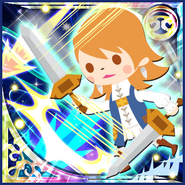 Final Fantasy Explorers.
Add a photo to this gallery