Baron Castle is the governing seat of the kingdom of Baron in Final Fantasy IV and Final Fantasy IV: The After Years. It is the home of the King of Baron, and other notable residents include the King's adopted son Cecil Harvey, Lord Captain of the Red Wings air fleet; Kain Highwind, Commander of the Baron Dragoons; and Rosa Joanna Farrell, a powerful White Mage. Neighboring castles include Damcyan to the north and Fabul to the northeast.

The Castle of Baron's ruling powers are often directly embroiled in whatever conflict the world is facing.

Cecil, captain of the Red Wings, returns to Baron Castle after raiding Mysidia and seizing their Crystal of Water. Cecil hands the Crystal over to Baigan, but questions the King on why he would order an attack on innocents. The King, displeased with Cecil questioning orders and taking it as a sign of insubordination, strips him of his rank and orders him to deliver a Carnelian Signet to Mist if Cecil wishes to earn his favor again. When Kain defends Cecil he is told to accompany him.

After Cecil becomes a Paladin and returns to Baron to claim an airship to challenge the Red Wings and their new captain, Golbez, on equal terms, he sneaks into the castle and discovers Baigan has become a monster and is a servant of Golbez. After killing him Cecil confronts the King, who reveals himself as Cagnazzo, an Archfiend and Golbez's servant, who killed the true King some time ago and has been impersonating him so Golbez could use Baron to collect the world's Crystals. Cecil kills Cagnazzo and Cid Pollendina, the kingdom's master airship builder, unearths his airship Enterprise. The Mysidian mages Palom and Porom petrify themselves to save Cecil and his other allies from a trap set by Cagnazzo.

Later, the party returns to the castle twice for short visits—once when Rosa teleports the party out of the collapsing Tower of Zot, and later when they need Cid's workers to attach a hook to the Enterprise so it can pick up and transport the hovercraft. After the party has traveled to the Red Moon and felled Zeromus, Cecil and Rosa are wed and named King and Queen of Baron, inviting the other party members to come to their coronation at the castle.

Cecil is awoken from a nightmare by Rosa, who tells him the day is the ceremony to celebrate the reconstruction of Damcyan and the Red Wings are waiting. They embark on the airship and fly towards Damcyan.

The castle is attacked by monsters, and Cecil, Rosa and Cid fight them off before Cecil orders Cid to take Rosa to safety on the Enterprise. Bahamut descends from the True Moon, ridden by a Mysterious Girl. Cecil is defeated and brainwashed to be used as her servant, and the Mysterious Girl uses Baron Castle as her base of operations from which to deploy the Red Wings to gather the world's Crystals for her.

In the antechamber they catch up to Kain and Rosa and the Hooded Man confronts Kain. It is revealed Kain is actually Dark Kain, Kain's darkness and repressed desires incarnate, and the Hooded Man is the true Kain who has been seeking to slay him. Kain duels Dark Kain and emerges victorious, absorbing him into his heart as he's learned not to shut away his dark past since it will always be part of who he is. In recognition of his trials, the Kluya's spirit on the Mt. Ordeals shrine transforms Kain into a Holy Dragoon.

After the voyage to the moon where the party felled the Creator of the Mysterious Girls, Cecil and Rosa again sit on the throne of Baron. Kain is appointed the captain of the Red Wings, and he and Ceodore head out with Luca and Cid on an expedition.

The party can enter the eastern tower's basement to find the spirit of the King of Baron on a throne in a small chamber. After visiting the Feymarch, Odin will battle the party to determine their strength, and if defeated will allow Rydia to summon him.

The last exit of the Ancient Waterway's B1 leads here. It is a secret passageway to the castle. By going straight through the water, then turning right, the player will see a small opening up ahead that leads to the courtyard of the west tower.

This is the first room accessible from the castle's main entrance. Red Wings soldiers occupy the west side of the floor, and while the Dragoons are on the east side. After Cecil speaks with the king in the beginning of the game, prompting Kain will trigger a flashback.

It is the passage after the castle's main building, and leads to the castle's throne room. After Cagnazzo is defeated and the party attempts to escape and find Cid, the archfiend traps them by closing in the walls. The twins petrify themselves for the rest not to get crushed. When the player is back in control they can prompt the statues, but no item can revive the twins. After the events of the Giant of Babil, the statues will be gone.

After Cecil raids Mysidia and the Water Crystal has been obtained, Baigan will lead him to the castle's throne room. The king procures the crystal from Cecil, but Cecil questions his motives. The king is angered and relieves Cecil of his captainship, sending Cecil to Mist instead. Kain tries to appease the king in vain, and is sent along with Cecil. After Cagnazzo's defeat, the two sentinels guarding the empty throne promise to Cecil that "a fiend will never again be allowed to befoul the throne."

It is the chamber located just before the throne room, to the left. Baron's black mages study in a room opposite the white mages' lab. A seemingly incompetent mage attempts to turn Cecil into a pig with the misspoken, "Piggy!" but ends up casting Mini instead. After the events of Mount Ordeals, a black mage will comment about Meteor and how "the tomes spoke true."

It is the chamber located just before the throne room, to the right. Baron's white mages study in a room opposite the black mages' lab. Here a mage informs Cecil of the reasons Rosa chose to follow in her mother's footsteps and become a white mage.

The player can visit Baron Castle's dungeon in the beginning of the game, located just before the West Tower. The dungeon is guarded by a sentinel. Black and white mages from Mysidia are shown imprisoned, but after Cagnazzo's defeat, the cells will be empty. The guard will also tell the player he awaits the day when dungeons will no longer be needed.

The entrance is beside the infirmary's. It is a treasureless part of the castle, and only serves as a way to Cecil's bedroom, which is on the highest floor.

Located in the castle's west tower, a number of events happen here. In the beginning of the game, Cecil takes a rest after the Mysidian raid and is approached by Rosa, who confronts him about his doubts. To escape the Tower of Zot, Rosa teleports the party here, and Kain hands over the Key of Magma to the party before they head to Agart. This room appears in the ending before Cecil and Rosa's wedding, when Cecil claims to hear his brother's voice.

The infirmary is accessible by the door on the right of the West Tower's entrance. It wards two Baron soldiers, and it is where some other soldiers are talking around a table.

Baron Castle's Observation Platform is accessible from the West Tower, then to the castle's Infirmary. Before the events of the Giant of Babil, it is vacant and unguarded. In the 3D remakes, the HP+50% augment will be obtained here after the giant's attack from a patrolling soldier who asks Cecil to return alive.

In the first part of the game, this part of the castle is guarded by a sentinel. It is inaccessible before the party defeats Cagnazzo, but the tower contains many treasure chests the player can plunder.

In Baron Castle's 1F, given that the player has defeated Cagnazzo, the sentinel guarding the treasure trove will inform them that he hears a voice much like the late King's, emanating from the East Tower's basement. If the party tries to run through the East Tower's B2, they will be stopped halfway by an "unknown force". Unless the player has earned the right to summon both Leviathan and Asura back in the Feymarch, they cannot trigger a scene. The scene shows the late king of Baron who reveals his spirit has lived on to become the summon Odin. Should the player choose to face him and emerge victorious, Odin becomes a summon for Rydia and gives his blessings to Cecil.

Note: all battles are scripted encounters

The background music that plays inside Baron Castle is called "Kingdom Baron". The theme is included in Theatrhythm Final Fantasy Compilation Album.

Cecil and his allies make their way from Mysidia to Baron along Devil's Road. Rescuing a befuddled Yang from the king's control, they infiltrate Baron Castle. 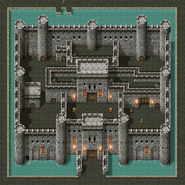 Baron on the World Map (GBA). 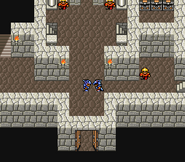 Outside of Baron Castle (PSP).

Baron on the World Map (iOS).

Baron in the opening (iOS).

Baron at night from the opening FMV of Final Fantasy IV: The Complete Collection.

Baron in the opening (DS).

Artwork of Baron Castle from a distance, from the Final Fantasy IV official novelization.