Baron is a kingdom in Final Fantasy IV, Final Fantasy IV -Interlude-, and Final Fantasy IV: The After Years. It is the homeland of Cecil Harvey, Kain Highwind, Rosa Joanna Farrell and her mother, and Cid Pollendina and his daughter. It is a powerful monarchy and one of the largest nations on the planet, ruled over from Baron Castle and the Town of Baron outside its walls. Baron is one of the only nations in the world with the technology to build airships, thanks to the research done by Cid, and has an elite squadron known as the Red Wings, initially commanded by Cecil. 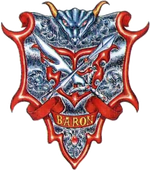 Baron is a very old nation, and was founded 800 years before the events of Final Fantasy IV. The land Baron was established on was abundant in natural resources, and it quickly developed into a blossoming city-state. A parliamentary government was established, although only the state's most influential families were permitted to vote. and industry and agriculture became the chief Baronian exports.

The rule by the people lasted for some 300 years. However, internal strife began to form within factions of Parliament. At first, matters were only political, but civil war soon broke out. A conflict known as the "Bloodstained Three Days" lasted for several days. The violence was eventually settled by the ancestors of the current King of Baron, and the family was crowned as the first royal family of Baron. Baron officially became a nation-state. Fifty years after the crowning of the King of Baron, there were talks about establishing a much needed army. The King of Baron would install his Personal Guard Corps, whose sole duty was to protect him. It can be assumed that Baigan's ancestors were at its head.

300 years before the events of Final Fantasy IV, a merchant ship from the small nation of Mysidia arrived at Baron and soon discovered its new military power. As a result, Baron soon became a very feared nation. At this point the Dragoon corps were formed by Kain's ancestors. Baron's military came to consist of the Eight Corps of Baron, consisting of the King's personal guards, the standing army, the Dragoons, the Dark Knights, the Black Mages, the White Mages, the captains and crews of their naval and airship fleets. 150 years after the two nations made contact, a security treaty between Baron and Mysidia was established, allowing for the creation of the Devil's Road.

Baron was once ruled by a benevolent king, who took Cecil and Kain under his wing and raised them as his children. Cecil was trained as a Dark Knight, while Kain decided to become a Dragoon in the mold of his father. Cecil was eventually made captain of the Red Wings. One day, Cecil leads a force that attacks Mysidia for its Crystal of Water.

Cecil questions the order and is dismissed from his post. He is then ordered to hunt Eidolons in the Misty Valley, and to deliver a Carnelian Signet to the village of Mist together with Kain. The package contained Bombs which would burn Mist down, and this treachery convinced Cecil and Kain that the king had to be stopped.

The King of Baron appointed a man named Golbez to lead the Red Wings, and Kain was brought under his mind control and made second-in-command. Cid had developed a new airship, the Enterprise, but would not allow the king to use it for malevolent purposes. As a result, Cid was arrested and imprisoned until he revealed where the Enterprise was hidden. Golbez and Kain lead the Red Wings in the First Battle of Damcyan and the First Battle of Fabul for the Crystals of Fire and Air, respectively. Despite the intervention of Cecil and new allies of him in Fabul, both sieges are successful and the Crystals are acquired, Golbez personally seizing Rosa as prisoner in the siege.

Yang is brainwashed by Golbez and appointed a captain of the guards. Cecil, after becoming a Paladin at Mt. Ordeals, returned to Baron via the Devil's Road with his allies, looking for Cid and an airship. Yang and his guards attack them, but Yang was brought back to his senses. Using Yang's master key to the town the group infiltrated the Ancient Waterway to sneak into the castle.

Cecil confronts the King of Baron, who reveals he was actually Cagnazzo, one of the Archfiends that Golbez controls, and that some time ago he killed the true King of Baron and has been impersonating him to use Baron for Golbez's ambitions. The group killed Cagnazzo. However, Cagnazzo made the walls in the antechamber of the throne room cave in, thus forcing Palom and Porom to petrify themselves to stop the walls. However, though the kingdom was free again, Golbez had taken the Red Wings for his own, crewing the fleet with his loyal monsters, and still had control of Kain.

The Red Wings move on to their next target and invades the Underworld. In the First Battle of the Underworld the dwarves and their tanks put up a tough fight, repelling initial Red Wings attacks on Dwarven Castle. Golbez moves in to personally seize the Crystal in the castle, and succeeds after a brief fight with Cecil's party. The dwarves move to help Cecil reclaim the Crystals from the Tower of Babil, but the plan fails and Yang has to sacrifice himself to save the Dwarven tank army from being destroyed by Dr. Lugae's Super Cannon. Afterwards Golbez seizes the last Crystal from the Sealed Cave, and the Red Wings depart for the Upper World. Although outmatching the Red Wings on the battlefield, the dwarves ultimately fail to protect the Dark Crystals.

After escaping from the Underworld, Cecil flew back to Baron, where Cid's workers installed a hook on the Enterprise so the party could carry the Hovercraft to new locations such as the Cave of Eblan and the Adamant Isle Grotto. After visiting the Feymarch, the party can return to Baron and go to the basement to see the ghost of the real king of Baron. He was actually the legendary knight Odin, and he challenged the party to a battle, after which he offered his power to Rydia so she could summon him.

Baron's Red Wings team up with the Dwarven Tanks in the Battle of the Giant of Babil, creating a diversion so that Cecil's party can enter the giant and destroy it from within.

After Zeromus has been felled Cecil and Rosa are married and take the throne of Baron as the new King and Queen. All the living characters in the game except Kain attend, as Kain is off training on Mount Ordeals.

After having a dream, Cecil is awoken by Rosa due to him flailing about like he was having a nightmare. Rosa tells Cecil that today is the ceremony to celebrate the reconstruction of Damcyan and the Red Wings are waiting for them. Soon after, they both embark on the airship and fly towards Damcyan.

Ceodore and the Hooded Man look for the Enterprise, which has flown to Damcyan. Meanwhile Edward and Harley travel to Baron to speak to Cecil about a meteor impact north of Damcyan. Suspecting something amiss, Edward grants Cecil a gift of Whisperweed in the guise of flowers—Cecil's ignorance of their true nature confirms Edward's suspicions, and allows him to eavesdrop on Cecil speaking to the Mysterious Girl on their plan to seize Damcyan's Crystal.

Returning to Damcyan, Edward is confronted by a Red Wings force lead by Kain, and though he and Rosa defend the Crystal, they fail and Rosa and the Crystal are seized. Fabul is also attacked for the Wind Crystal. Ceodore, Edward, Cid and the Hooded Man pursue Kain back to Baron where it is revealed the Hooded Man is Kain, and the Kain assisting the Mysterious Girl is Kain's dark side. Kain defeats his other half and becomes a Holy Dragoon, and the five confront Cecil. Cecil attacks them, assisted by Odin under the control of the Mysterious Girl, but Odin comes to his senses, being the former King of Baron, and strikes down Cecil.

As this confrontation takes place, Rydia, Edge, Luca and the Man in Black arrive at Baron but find it protected by a barrier. Traveling the world to gather their allies and free Rydia's Eidolons, they return to find the barrier dispersed. Entering the throne room after Cecil's defeat, the assembled party sees the Mysterious Girl, and Cecil recognizes the Man in Black as Golbez. The party defeats the Mysterious Girl but discovers there are many copies of her. Declaring she has all the Crystals and the planet "serves no purpose," they depart, and Golbez calls the Lunar Whale to take the party to the True Moon.

After the Creator has been felled, Cecil is King of Baron again and is seen sparring with Ceodore before Kain, now Captain of the Red Wings, calls to him for their next assignment, to assist in the rebuilding of the world.

The background music that plays inside Baron Castle is called "Kingdom Baron", while the track that plays in the town of Baron is the Final Fantasy IV "Town Theme".

Baron is present as a room for customized characters of the Multiplayer Mode Online Lobby.

In the Dawn of Souls and 20th Anniversary remakes of the original Final Fantasy, Baron is one of the automatic names the player can choose for the Warrior job.

Baron is mentioned in Final Fantasy Tactics, in its history records.

One of the rooms from the Online Lobby in Dissidia Final Fantasy is named Baron.

Baron on the World Map (GBA). 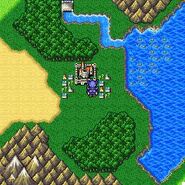 Baron on the World Map (Mobile).

Baron in the opening in Final Fantasy IV: The Complete Collection.

Concept artwork of Baron at night.

Baron at night from the opening FMV of Final Fantasy IV: The Complete Collection.

Render of a Baron soldier (3D).