Cid Pollendina: Oh, shut up and help me remodel the Barheim Passage page!
Please expand this article into a full one. The following tasks need to be completed:

Don' get many visitors down here. Come scavengin' fer odds and ends, have you? Oh, the way out? It's just back up those stairs—To smithereens, you say!? Then there's nothin' left but to find some other way out through these tunnels.

The Barheim Passage is a location in the land of Ivalice in Final Fantasy XII. It is an underground passage that connects the Nalbina Dungeons to the Dalmasca Estersand. Long since abandoned, the passage now provides no real use.

Originally it was a passage used to speedily bring goods into Nalbina Fortress, but fell into disuse with the advent of airships as the preferred form of transportation. Now, the only people who walk down its paths are people escaping from the Nalbina Dungeons. In order to get back to the passage later in the game, the player must complete the Patient in the Desert sidequest on Dalmasca Estersand.

An underground passage beneath the fortress at Nalbina. Originally a railway to carry goods into the fortress, the passage was closed with the introduction of airships as the primary means of transport. The abandoned railway line is now rife with Mist, and the dwelling place of many fell beasts.

The Barheim Passage is located just to the east of Rabanastre, south of the Nalbina Fortress.

Barheim Passage has numerous treasure chests, and some Mimics posing as treasures. In the original version, the treasures the player encounters when going through Barheim Passage the first time with Basch as a guest are nothing special and contain either gil or common recovery items or low level equipment. The treasure at the far end of the Op Sector 37 has a 60% chance to spawn and a 75% chance to contain a Mage Masher.

During the first time through, the best treasure is the Oaken Pole, which has a chance to appear at the far end of The Zeviah Subterrane area, on a little "island" where the player can cross if they "walk off the map". Because the treasure respawns, it is possible to get multiple Oaken Poles early, but as soon as the player exits Barheim Passage they can no longer return until later.

If Barheim Passage is explored later with the Diamond Armlet equipped, all of the "early" item treasures are either Knots of Rust or Elixir (10% chance). After obtaining the Barheim Key, the player can explore areas that were sealed off previously. In the Special Op Sector 5 all treasures contain gil, and the area has the Rare Game Ithuno posing as a treasure from which the player can steal the Deathbringer one-handed sword. In East-West Bypass the furthest treasure chest in the dead-end bit can contain a Turtleshell Choker. The same treasure may contain a Bubble Belt when Diamond Armlet is equipped.

In the Zeviah Span, the treasure right on the middle of the bridge can contain Celebrant's Miter, and the one at the south end can contain Cleric's Robes. Mostly the item treasures at the far end of the Barheim Passage are Knots of Rust, but the treasure that normally contains either 500 gil or an Elixir, can hold Zodiac Escutcheon with the Diamond Armlet, although the chance is small. If playing the original version, the player can also obtain the Dragon Mail from a treasure in West Annex, near the area where the path starts to narrow. The treasure in Terminus No.7 Adjunct contains either 20,000 gil or the Kaiser Shield with Diamond Armlet equipped, but is a treasure that will never respawn.

In the Zodiac versions, all treasures are different. Instead of the Oaken Pole in the original, the same area may have four weapons, though their usefulness depends on what License Boards the player has chosen for their party. The Special Op Sector 5 also has various equipment, whereas the original just had gil. The Zeviah Span has the useful Shear technick.

This chest does not respawn.

Chests in this location only in appear in the Zodiac version. Neither respawn.

After having been found trespassing in the Royal Palace of Rabanastre, Vaan and his two sky pirate comrades Balthier and Fran are sent to Nalbina Dungeons. Fran, being a viera, senses a way out. Turns out the "way out" is a pit at the deep end of the dungeons, and there they also find Basch fon Ronsenburg, who has been kept in a private cage. The party free Basch and knock his cage down the pit, collapsing the tunnel, and ending up in the Barheim Passage.

With Basch as a guest the party make their way out of the passage fighting mimics and finally the Mimic Queen who explodes, and the entrance to the passage caves in. Later, if the party obtains the Barheim Key, they can return to explore the passage through an alternative entrance.

The manga version expands on the events with Vaan tells Basch Reks was interrogated as a co-conspirator on Raminas's murder, and died from the methods used to force a confession. The four flee down the passage from a Mimic Queen, Basch grabbing the sword of a fallen adventurer to fight.

Vaan distracts the Mimic Queen while Basch cleaves it in two, but they disturb a nest of smaller Mimics. Basch fights them off to protect Vaan, the two speaking of Reks's belief in Basch and the true events of Raminas's death during the battle. With the Mimics dead the group escapes into the Dalmasca Estersand, and Basch heads to Rabanastre, telling Vaan he will accept atonement at his hands after he is finished what he needs to do.

Speak to Burrough to discover that the fuse had blown and needed to be replaced. He happens to have a fuse which he then gives to the party. Replacing the fuse opens the gate, but causes the power level to drop to 70%. After that he explains that as long as the lights are on the Passage is not very dangerous, but if the power level drops below 30%, "fierce beasts start comin' out in the dark".

For the duration of the level, if the power level drops below 50%, Zombies (Male), Zombies (Female) and Skeletons appear. If it drops below 30%, Specters and Skull Defenders appear. There is also a chance that a Battery Mimic will respawn between 31-50%. Periodically, the party will find Battery Mimics to stop them from feeding on power conduits and draining the electricity over time. As long as a Battery Mimic lives in the current area, the power will continue to slowly drop. When a Battery Mimic is killed, some of the power they consumed will be restored. After defeating the Mimic Queen, the Battery Mimics no longer appear.

The Minibug is found in the East-West Bypass area in the corner in the east end. It has a 20% chance of appearing, but is said to be higher when Ithuno, another Rare Game, is in Special Ops Sector 5. Unlike Ithuno and Mimics in general, Minibug is not disguised as a treasure chest, making it easy to spot.

Ithuno has a 20% chance of spawning for every entry into Special Ops Sector 5 and will be disguised as a treasure chest near the end of the area, behind a big rock on the train tracks (near one of the Surianders and after the Adamantitan). If a chest appears there, one will know it is Ithuno if the bottom section of it is purple and the chest itself is silver (other chests in the area are green). The Deathbringer sword can be stolen from it, one of the best weapons early on. It's possible to get more than one if the player keeps spawning Ithuno.

To find Ishteen the player must have spoken to the "Huntmaster" in Phon Coast and defeated Thalassinon, which will trigger the start of the Rare Game quest. Ishteen then appears in The Zeviah Span and East-West Bypass. Its odds of appearing in these two areas increases by 2% every ten seconds the party spends there. The odds will hit 100% after roughly eight and a half minutes. It will appear right next to the party.

Like all Trophy Game it will never respawn once killed. It is actually possible to zone back and forth between the two zones, and make it appear in both, stealing one rare Soul of Thamasa from each.

You heard of the Barheim Passage? Legend says you can hear the eerie cry of a woman from the depths of that accursed place.

The western mines of the Barheim Passage is the sealing place of the optional Esper Zalera. After Zalera's defeat, passage to the Garamsythe Waterway is opened. To reach this part of the passage the player must complete the "Patient In The Desert" sidequest at the Dalmasca Estersand.

Gilgamesh can be found in the Barheim Passage at The Zeviah Span area during the Matamune Rod side quest. He won't fight the party, only hands over a fishing rod.

The items available for purchase change throughout the game. The best items are available after the Pharos.

Consult the armor, accessories, and magick articles for more information on these items. Burrough will be selling some of the best wares after the events in Pharos. 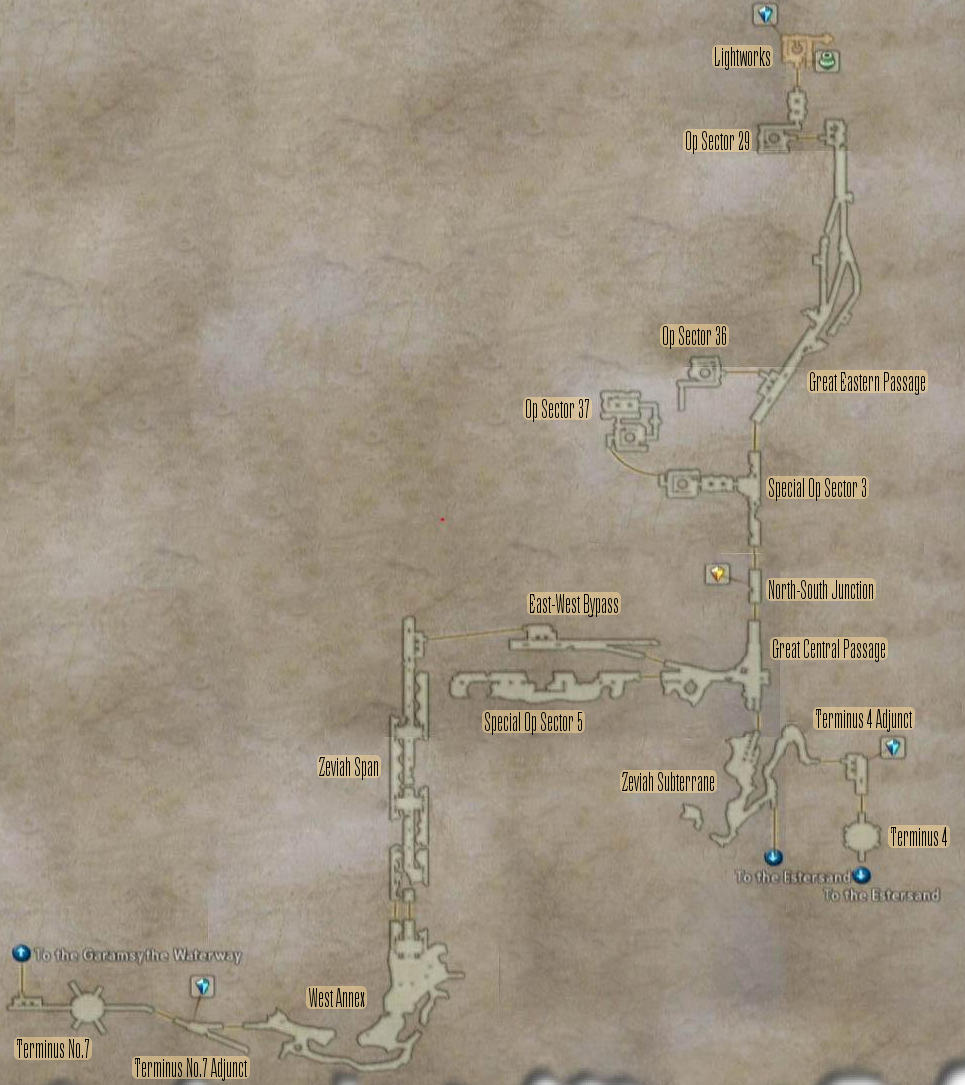 The cage lands in the Barheim Passage, a monster-infested network of tunnels. Basch joins the party as they make their way back to the surface.

If the player comes to the Barheim Passage entry from the Dalmasca Estersand before the location is visited as part of the story, the entrance is barred by a Shifty Seeq and a Bumbling Seeq. The former tells Vaan to "get lost", while the Bumbling Seeq says their boss is inside looting Barheim of its treasures. The Shifty Seeq berates the Bumbling Seeq for blabbering about their secret. If the player returns to the Barheim Passage entrance after escaping it, the seeq are still there are explain that the e entrance caved in but their boss is still inside, giving a clue that there is another way in with the right key.

Burrough is first met when the party crashes down into the passage. Later, they can meet the bangaa in Nalbina, where Burrough recognizes Vaan and talks about escaping Barheim Passage. However, if the player goes back to the Barheim Passage, they can find Burrough there as well, having never left. 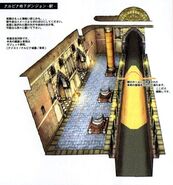 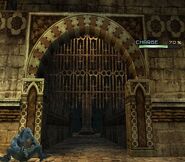 Gate from the initial area.

Deepest reaches of the passage where Zalera is found. 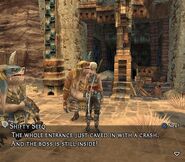