Bows
The Bard is a Job in Final Fantasy XIV, introduced as the Discipline of War Archer (弓術士, Kyuujutsushi?, lit. Archer) in the original release. Players start as an Archer, and then may upgrade to Bard using the Soul Crystal obtained from the quest

A Song of Bards and Bowmen after Archer reaches level 30, and completing the quests

The One That Got Away.
See also: Archer (job), or Bard (job) 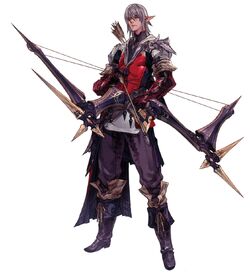 The enduring popularity of the Bow is a testament to its elegant design, but this simple weapon would be of little worth without the surpassing skill of those who master it - the archers. Bow techniques such as high-angle fire enable archers to assail their foes with deadly precision, even from great distances.

Constant assessment of the battlefield enables them to carefully determine the most advantageous ground from which to loose, as well as the nature of the arrows best suited to their enemy. Along with the longbow sentries of the Elezen military, the shortbow hunters among the Miqo'te are widely regarded as the most skilled with a bow. The guild's teachings cover a variety of long distance weapons, down to the simplest throwing rock.

Archers wield a bow and, while not possessing as much damage-dealing potential as other DPS classes, have the advantage of both range and instant cast abilities. While their HP and defense are rather low compared to other disciplines, they excel in critical strikes and direct hits, increasing the total amount of damage hitting an enemy at a time.

Archers lack combo actions, but do possess abilities that increase the chance of critical strikes, allowing them to quickly deplete an enemy's HP. Archers also have access to area-of-effect attacks and can inflict status ailments on their enemies.

The word bard ordinarily puts folk in mind of those itinerant minstrels, fair of voice and nimble of finger, who earn their coin performing in taverns and the halls of great lords. Few know, however, that bards in fact trace their origins back to the bowmen of eld, who sang in the heat of battle to fortify the spirits of their companions.

In time, their impassioned songs came to hold sway over the hearts of men, inspiring their comrades to great feats and granting peace unto those who lay upon the precipice of death.

Bard shares role actions with Machinist and Dancer, as all three are classified as Physical Ranged DPS. Bards specialize in songs that enchant allies. Songs can only be executed by targeting an enemy and extend a Bard's abilities by granting additional effects, such as resetting other abilities' recast time. Bards also have abilities that refresh their status effect duration on enemies, as well as maintain constant damage over time.

After meeting with Jehantel Fointeaume in the South Shroud, the Warrior of Light is introduced to Sanson in Gridania outside of the Archer's Guild, where they are told about his ambition to establish a new unit of bards in the Twin Adders. He is enthused to meet them, and hopes that their combined skill and determination will help lead to the discovery of the Ballad of Oblivion, and prove to the Gods' Quiver the power of song and not just arrows. In his enthusiasm, Sanson forgets to even ask the Warrior of Light and Jehantel their visit's purpose, and so they follow him to his meeting with the Gods' Quiver.

Within the Seat of the First Bow, Sanson petitions his expedition to Coerthas, where he will discover the origin of the Ballad of Oblivion. Though skeptical, the Gods' Quiver sends him and the Warrior of Light on a trial in the East Shroud to prove their mettle, as well as assign him an archer of the Gold Bulls' unit to join them. At the trial point, the Warrior of Light finds Sanson under attack by forest creatures. As they tend to Sanson, another creature attempts to sneak up on them, but Guydelot Thildonnet swiftly defeats it, revealing himself to be the bard assigned to them by the Gold Bulls. Sanson is furious, as Guydelot's reputation as a poorly disciplined soldier precedes him, leaving Sanson to believe the Gods' Quiver wants him to fail. Jehantel vouches for Guydelot's skill, as he is one of his best students. Sanson begrudgingly agrees to Guydelot's assistance, and returns to the Gods' Quiver to tell them of the completed assignment, and the trio departs for Ishgard.

Upon their arrival Sanson is determined to get to work, but Guydelot takes his time to enjoy the city. Frustrated with his lack of professionalism, Sanson follows Guydelot to Falcon's Nest to prevent him from misbehaving. Guydelot had run into the winter wasteland in pursuit of a knight, and is found assisting several Temple Knights from draconic attacks, where he is delivering a nameday present to a knight from his lover in Ishgard. Sanson focuses on the knight's possible knowledge of the Ballad of Oblivion, rather than on Guydelot's selflessness.

The knight leads the trio to the Convictory to speak with a soldier named Celaine, who is able to deliver souls to the heavens with a song. She insists she is no bard, and it is not a song she wishes to sing. Sanson tries to coax it out of her, requesting the trio accompanies her on an upcoming mission at Twinpools. The Warrior of Light and Guydelot provide support by taking out several enemies, though Celaine's unit suffers heavy losses. She sings to her fallen comrades a song of mourning, merely a Halonic requiem sung for the lost, and not a powerful song like the Ballad of Oblivion. Sanson apologizes for trying to force Celaine to relive the sadness of her lost comrades. Celaine directs them to Tailfeather to speak to a man named Sylviel who may know more of the ballad they seek.

In Tailfeather, a sellsword rushes into the village seeking help, for Sylviel's excavation party is under attack in Gnath territory. The three charge into Loth ast Gnath, and after dealing with many beastmen soldiers, they bring Sylviel to safety. Reuniting in Tailfeather, Sylviel departs to study the Ballad of Oblivion as Guydelot ponders if the song is but a fairy tale, and that it would be best to return to Gridania to pursue other avenues. Sanson reprimands him for wanting to abandon his mission, and tells him that the Gods' Quiver see both of them as thorns in their sides, hoping they return empty-handed so they can dismiss Guydelot and keep Sanson at his lower station. Guydelot leaves the party, angry that Sanson only cares to find this ballad to improve his rank and not support bards like him and the Warrior of Light.

Regretting his words, Sanson waits in Tailfeather for Guydelot to return, but he does not. Sylviel reveals that the "song of the heavens" is likely a natural weather phenomenon rather than an actual singer. The Warrior of Light tells Sanson that there is a community of moogles that live in the Churning Mists in the sky, who may be these singers. The two embark while telling Sylviel where they are going in hopes of Guydelot's return.

As they reach the summit of Sohm Al, Sanson comments about how beautiful the area is, and how he wishes Guydelot was present to compose a song about it. The two visit Moghome, the village of moogles, where Mogta joins them to help find the Ballad of Oblivion. The new trio still struggles to find it, as Chieftan Moglin suggests they are missing a vital part of their party. Sanson realizes Guydelot is the missing piece.

The trio makes its way to the Sea of Clouds with an airship provided by Gridania. They arrive at a stone edifice, to which Sanson accidentally unleashes a dangerous creature called Ligeia. She sings a terrible melody, revealed to be the Ballad of Oblivion. As Sanson tries to send the Warrior of Light and Mogta away to face the beast alone, Guydelot appears, playing a delicate, healing melody to counter the ballad. He chides Sanson for trying to impress others, and reminds him that the desire to aide those around them is what empowers a bard's song. Together, the four defeat Ligeia and put an end to the Ballad of Oblivion for good.

Guydelot reveals that he boarded the airship with them secretly and had been reflecting on himself over Sanson's journal and how Sanson's goals were more earnest than he expected. The two realize they can compose their own Ballad of Oblivion, and request the Warrior of Light provide inspiration as well.

With a newly-established unit of bards, Sanson enlists the help of the Warrior of Light to inspire the new recruits on their first mission to ensure success and high morale. With Guydelot's transfer into the unit, he is certain their success is guaranteed. Their mission regards an anonymous letter penned to the Twin Adders about the secret truths of the Autumn War. Guydelot considers it little more than an errand, and accuses Commander Vorsaile Heuloix of looking to claim any success of theirs under the rug. Sanson reprimands him for speaking to a superior officer in such a manner.

Archers and bards wield bows while their armor is primarily made up of "Aiming" gear, light armor with average defenses that they share with other ranged physical DPS classes.

The primary attribute for archers and bards is dexterity, which boosts their attack power, and should be prioritized over other attributes. As DPS disciplines, they draw the most benefit from the critical hit, direct hit, skill speed, and determination secondary attributes, which all improve their damage-dealing capabilities in some way.

The Job Gauge was introduced to players in 4.0 Stormblood. The Bard uses the Mage's Ballad, Army's Paeon, and The Wanderer's Minuet Gauges.

The Job Gauges share the same trigger effect called Repertoire, which can trigger if either Caustic Bite or Stormbite has dealt critical damage over time. Repertoire grants more effect stacks, except for Mage's Ballad, and additional effects to songs.

The Mage's Ballad Gauge indicates the time remaining for its duration. While Mage's Ballad is being sung, the Repertoire effect resets the recast times for Bloodletter and Rain of Death.

The Army's Paeon Gauge indicates the time remaining for its duration and the number of current stacks. If the Repertoire effect triggers while Army's Paeon is being sung, the bard is granted one stack and reduced action cast and recast time.

Archers' and Bards' Limit Breaks focus dealing powerful damage to enemies in a straight line in front of the player. They both share the same Level 1 and Level 2 limit breaks as Machinist and Dancer.

Originally however, they used the same Limit Breaks as healer classes. 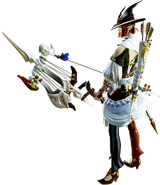 A Miqo'te Bard in the End of and Era video.

The Archer's weapon of light. 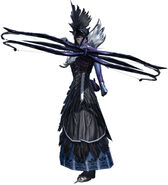