A bright tune to soothe a party's wounds... A brisk march to raise a party's spirits... A forbidden chant to weaken a party's foes... The bards of Vana'diel use music as their weapon.

Bards are an advanced job in Final Fantasy XI available to players once they reach level 30. Bards are a type of support job. They exist more-so to boost the party's effectiveness than to be good on their own. They accomplish their task through using various songs.

Bards rely upon charisma for their offensive songs, though not so much for their positive songs. Also, despite the fact that Bards do not naturally have any MP, they do benefit from having it. For both of those reasons, the high charisma of Elvaan or the high MP totals of Tarutaru make them ideal bards; however, bard is one of the least statistical or equipment based jobs and bards of every race are popular, including the Mithra and Galka races. 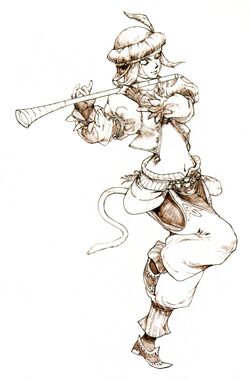 In order to become a bard, a player must complete multiple quests, which all reveal a part of a person's story. The first quest, "The Old Monument", starts in Jeuno. It requires the player to head to the Southern coast of Buburimu Peninsula to find an old monument with song runes on it. Upon hearing this, another NPC overhears and mentions that such a song might cheer up her friend.

The first portion of the quest is just finding the monument and inspecting it. At that point the player will happen across another traveler looking at the rune and complete the first quest. If he is really savvy, the player would bring with a piece of parchment to make a rubbing of the runes. Taking the song runes back to Jeuno, the player can complete the quest "Minstrel of Despair".

The third leg, simply named "Path of the Bard", requires the bard to talk with Bki Tbujhja again, the same NPC who gave the original quest. She mentions another set of runes in the Valkurm Dunes. When the player finds the runes on the hidden beach, he will be visited by a few NPCs and told a story, after which point the player may level as a Bard. 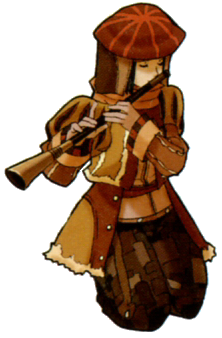 Bards use three types of instruments; wind instruments, string instruments, and of course their own Singing voice. Their songs are generally positive in nature, affecting one or all party members. Their ability to effect esentially any ally ability from damage, to accuracy, to evasion, and MP or HP regeneration makes them highly sought after. Bards have a much more limited ability to negatively affect their enemies with songs, but some songs do exist.

Bards can fight, though they generally do not have the time to do so. They generally are limited to wands, staves, light swords, and knives. In this version any creature can be effected by up to two songs by a bard, and singing a song takes 8 seconds. Since they have short duration, the bard tends to do nothing but sing songs ad nauseum.

The vast majority of all Bards use White Mage as a support job. With such a job, they can facilitate in a bit of curing now and then, the use of Stoneskin for pulls, and the removal of status effects from enemies. Even in high end events, such as Dynamis, Bards are often using bar-spells.

Ninja is occasionally used by Bards for pulling, especially "big birds" out in Lufaise Meadows, or any other fast mob that hits hard but slowly. The bard loses some support ability and a few points of charisma for the benefit of gaining 3 hit blink through utsusemi.

Red mage is not completely without its merits, but use is extremely rare. The major advantage to this setup is fast cast which will bring the time required to sing a song down considerably as well as shorten recast times, allowing the bard to pull faster. Phalanx can help mitigate damage on pulls. Stoneskin is still an available spell. A bard may not be able to remove status effects, but he can still cure.