The Bard is a job in Final Fantasy V and part of the Fire Crystal job set, although the actual shard is found in a chocobo gullet later on. The Bard has the second-worst Magic Power out of all mage classes, just above the Red Mage, as well as the second-lowest Stamina in the game, making them prone to dying when not handled correctly. Bards focus on their Sing skillset, which comes to use against enemies vulnerable to Stop or Confuse, against undead enemies, or in drawn-out boss fights.

Bards are the only job outside of Freelancer to equip harps whose damage is often based on a percent of the enemy's current HP, and therefore will not do much damage (with the exception of the Apollo Harp, as it does not deal fractional damage).

Mastering Bard for all four characters in the mobile and Steam versions earns the player the achievement "The Music Man".

The Bard's costume is designed to reflect a medieval minstrel. All five wear a green shirt and headband. Lenna and Krile wear dresses, Bartz wears leggings and Faris wears baggy trousers, and Galuf wears a long tunic that reaches his ankles.

The Bard has a host of songs. Some can only obtained in the first or second world. While the effects of some songs are instantaneous, other songs are ongoing, meaning the Bard will continue to sing until he/she is hit by an attack, killed, or silenced, though in most cases the song's effect will remain even after the Bard stops singing. If a party member is turned into a zombie while singing, they will continue to sing as a zombie.

The Equip Harp ability gives characters the Bard's base Agility and Magic unless otherwise already at a higher value.

Upon mastery, Freelancers and Mimes gain the Bard's base Agility and Magic unless they already have a higher base from another mastered job.

Sing is the Bard's innate command ability, and they naturally equip harps. Leveling the job up allows the character's other jobs to use these as well. 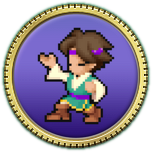