Bards use their songs to enhance their party's performance. The effect of their songs varies depending on the harp they use.

The bearer of this certificate has expertly harnessed the power of song and is deemed worthy of the title of Master Bard.

Bards do not have a basic 'Fight' command. Instead, they use the 'Sing' ability, which only becomes available when they have a harp equipped. Singing makes Bards attack the enemy with their currently equipped harps, possibly inflicting a status effect depending on the harp.

Each use of the Bard's 'Scare' command reduces all enemies' levels:

Multiple uses of 'Scare' can eventually lead to enemies running away instead of attacking in battle. An enemy will only run away if:

If the above condition is met, then the chance that a monster will choose to Run will be:

As an enemy's level is decreased, there is the potential of reducing its Magic Attack Multiplier. Bosses are immune to 'Scare' and will also never attempt to Run.

The Bard's 'Cheer' command gives an additional bonus to physical Base Damage for each party member, with its effects stacking:

Selecting Sing will cause the Bard to sing a song depending on which harp the user has equipped. The song will always be performed as the first action of each turn.

In the Pixel Remaster, songs are not tied to harps but learned by the Bard at certain job levels.

The Bard appears as a character card.

The Bard from the 3D version has a Triple Triad card in Final Fantasy Portal App.

When a Bard uses his or her Sing ability in the 3D version, they chant the first five notes from the "Final Fantasy" theme.

Unused dialogue for the remake suggests that the Bard job was going to be moved from the Water Crystal to the town of Duster.[1]

Arc as a Bard.

Refia as a Bard. 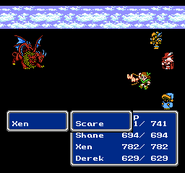