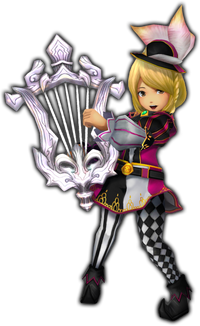 Bards enhance their comrades' abilities from the rear ranks by playing special songs using their instruments as weapons.

Bard (吟遊詩人, Gin'yuushijin?) is one of the jobs available in Final Fantasy Explorers.

It is unlocked in the 3★ Quest, "Aptitude Exam: Ninja & Bard". It can be mastered by completing any 10 quests, then the 5★ quest "Mastery Trials: Bard."

Bard is categorized as buffer and healer. It boasts high spirit, focus, mobility, luck and load. They can initially equip instruments, tomes and staves. After mastery, they can also equip bells, and can dual wield.

They are proficient in low-High recovery and support magic, and low offensive magic. Their passive ability is Hide, which decreases accrual of malice, making enemies less likely to target them.

Their unique ability is Sing, which heals/buffs allies in an area depending on how long the ability is charged. There are four different effects: