The Bard is a wind-elemental eidolon that appears in Final Fantasy Dimensions II. The signet can be obtained for Aemo as a first-time completion reward for the "Battle Program" side quest in the Future era.

If obtained during Chapter 2-1, the signet will provide Aemo with a large boost in HP and magic stats. If upgraded to rank two at that point, it will also provide balanced upgrades for her attack and speed stats.

The signet's Siren Song abilities are helpful when dealing with high leveled enemies at that portion of the game, allowing Aemo to inflict stop on an enemy party for a single turn. In addition, its Soul Etude summon ability functions as a party-wide Esuna skill, making it useful for handling Chapter 2 bosses that use status ailments. However due to its low stats and the signet lacking a passive ability, it is best for the player to replace the summon when new signets become available for Aemo.

The Bard is based on the recurring job in the series, specifically the Bard from Final Fantasy XIV. Her artwork depicts her wearing variants of the Bard's Choral artifact armor from the online game, which consists of a tunic, ringbands, footless tights, and sandals. She also wields a harp in her right hand, and hangs a tamboree on her waist. Her final artwork depicts her with a coloration similar to the original Choral armor set. Her harp also changes to resemble the Artemis Bow's harp attachment from Final Fantasy XIV.

The Bard’s summon attack is Soul Etude, which restores HP for all allies. It also has the ability to remove poison, darkness, and silence. Summoning the Bard costs 1 bars from the Summon Gauge.

The following are the abilities Aemo can learn from the Bard: 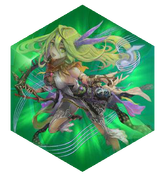 In the original Japanese free-to-play versions of Final Fantasy Dimensions II, the Bard's signet could only be obtained through the game's summon draw shop and could be equipped by all party members. 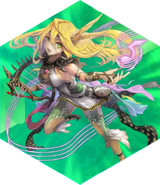 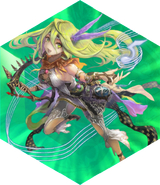 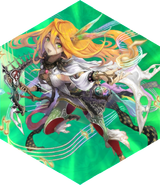 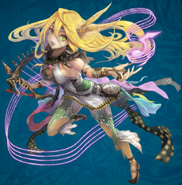 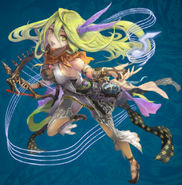