Tidus when entering battle against Barbatos.

Barbatos is a fiend in Final Fantasy X encountered Inside Sin. It is a large armored yellow/orange creature with short legs and big tube-like arms, which are used in battle as shields and hammers.

Barbatos has high Defense and the highest HP of any regular enemy. It is difficult to inflict Overkill on Barbatos, because of its large Overkill threshold and tough Defense. It can drop weapons with Piercing for any party member, rather than just Kimahri and Auron.

There are several ways to defeat Barbatos. The safest way is to cast Demi (preferably using Doublecast) to bring Barbatos's HP down to a manageable level, before finishing it off with conventional attacks.

If the player has a weapon with Zombiestrike, they can use it to inflict Zombie on Barbatos, and then cast Curaga on it for several thousand points of damage per casting. Barbatos cannot, however, be destroyed by revivification abilities.

If the player can withstand the threat of Mortar, they can use Armor Break to destroy Barbatos's defenses, but this will only work 50% of the time. 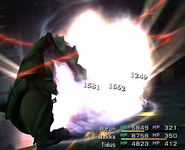 Retrieved from "https://finalfantasy.fandom.com/wiki/Barbatos_(Final_Fantasy_X)?oldid=3368340"
Community content is available under CC-BY-SA unless otherwise noted.