Barbariccia is a wind-elemental summon that appears in Final Fantasy Dimensions II. There are two versions of Barbariccia available in the game, one that teaches Rapid Thunder abilities to Wrieg, and another that teaches Charybdis abilities to the Deathlord. Wrieg's Barbariccia signet can only be obtained through doing a specific side quest and the Deathlord's version can only be obtained by purchasing her signet through the Mog Shop. 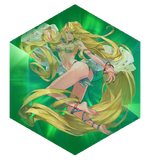 In the original free-to-play versions of the game, both versions of her could only be obtained through the summon drawing shop and equipped by any party member.

Artwork (★3).
Add a photo to this gallery

Artwork (★3, Japanese release).
Add a photo to this gallery