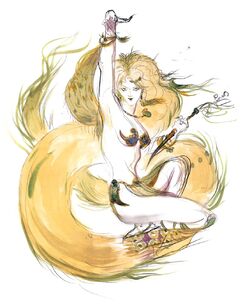 One of Golbez's elemental archfiend, the beguiling Empress of the Winds.

Barbariccia (バルバリシア, Barubarishia?), also known as Valvalis or Valvalecia, is a recurring character in the Final Fantasy universe. First appearing as a minor antagonist, she is a fiend associated with the element of Wind. She has the signature ability of shielding herself by whipping her hair to form a protective whirlwind around her, and the recurring ability Maelstrom.

Barbariccia appears in the Dawn of Souls and subsequent remakes as a boss at the final floor of the Hellfire Chasm bonus dungeon. Upon being defeated, she drops a Braveheart and the player may exit the dungeon.

I should have killed you and Rosa both when I had the chance...allow me to amend my past mistakes!

Barbariccia is one of Golbez's four Archfiends, titled the Empress of the Winds. She makes her home in the Tower of Zot, and is protected by her three minions, the Magus Sisters. She does not make an appearance until Cecil and his friends attempt to rescue Rosa, who is kept in the top floor. Barbariccia then appears and blames Kain Highwind for being a traitor.

Kain says he was being controlled by Golbez, and his true wish is to fight alongside Cecil. The party defeats Barbariccia and in her dying breath, she destroys the tower, hoping that Cecil's party would be trapped inside. Rosa casts Teleport, and warps the party out.

Barbariccia is revived by Zemus, and makes an appearance in the Giant of Babil, along with Scarmiglione, Cagnazzo, and Rubicante. Cecil's party has to defeat all four Fiends together.

In the 3D remake, she is voiced by Yūko Kaida [1] and Karen Strassman*(credited as Kirsty Pape in the DS version), both also voiced Rosa in Japanese and English respectively.

Main article: Barbariccia (The After Years)

Barbariccia is summoned by the Crystals within the True Moon. When she regains her senses she casts Tornado on herself, but is beaten by the party. She recognizes Kain if he is the party, as well as Golbez. She bears Kain no ill will as he admits he fought her to give her peace and is overjoyed to see Golbez again, though he asks her to forgive him for fighting her. The Gungnir is received after beating her. 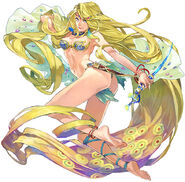 In the original free-to-play versions, both versions of her could only be obtained through the summon drawing shop.

Barbariccia is a summon. She is summoned as a counter to an opponent's summon and exchanges the summoner's and the opponent's Bravery by using her signature attack Maelstrom. Her original artwork from Final Fantasy IV is used in her summon animation. Barbariccia can be obtained on the third stage of the Shade Impulse III storyline.

Barbariccia seems to act as a "counter" version of one of the Four Fiends from the original Final Fantasy, who work on timers. Specifically, Barbariccia's Maelstrom works much like Kraken's Water Arcana; both exchange the two combatants' Bravery. This is because both Barbariccia and Kraken are the third of the "fiends" encountered in their respective games.

There is also an armor bearing her name: Barbariccia's Wristlet.

Barbariccia has the same function from Dissidia. She can be purchased from certain Moogle Shops for 100 KP. The armor referring to her also returns.

Barbariccia also appears as a tutor for the new Labyrinth feature, at the in-game manuals.

Barbariccia controls the Magus Sisters as she fulfills her role as one of Golbez's loyal Archfiends. She rules over wind and the hearts of men, her beauty and locks hiding her position and her proud cruelty.

Barbariccia appears as an enemy.

Barbariccia appears as an enemy in Battle Music Sequences.

Barbariccia appears as a boss.

It's not hard to see why this scantily clad adversary stands out amongst the Four Fiends. A haughty creature, she tends to look down on all others as beneath her concern.

Barbariccia appears as a playable character who could be initially recruited during the Challenge Event Triumph over Darkness as a First Time Reward for completing the event's Mount Hobbs stage. She also appears as a boss.

Barbariccia appears as a summonable vision and optional playable character. A 5-7★ Rare Summon available since the Final Fantasy IV event The Tower of Zot, her job is listed as Elemental Archfiend, and her role is Magic Damage. Her Trust Master reward is the passive ability Barbariccia's Spirit, whereas her Super Trust Master reward is the accessory Barbariccia's Bangles. Barbariccia was first released in the Global version but was later ported to the Japanese version with a different rarity (4-6★) and skillset.

She also appeared as a boss battle in the exploration event The Giant of Babel, fighting the player with the rest of the Four Fiends in succession. 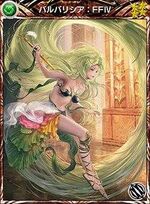 A parody of Barbariccia from Final Fantasy IV makes an appearance in the 4th chapter. The chapter number they appear in alludes to the number 4, their game's origin. The seasons have been stolen, and by defeating the Four Archfiends will return the seasons. They each have a castle, and are located on the four corners of the map. Fallicia (フォーリシア, Fōrishia?), the Fiend of Fall is found in the northwest castle.

With exquisite beauty and gold tresses, this lone female among the Elemental Archfiends wields wind as her weapons.

Barbariccia appears in promotional cards. She was a special capture to celebrate the release of Final Fantasy IV for the iOS. She is Rank 5 (the rarest) and a Ghost-type Guardian that would have been found in the Deadmoon Desert.

Barbariccia in the Tower of Zot from Final Fantasy IV (3D). 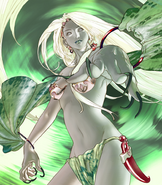 "Valvalis" was the result of the 8-character limit for names in the SNES version of Final Fantasy IV. It is derived from the early kana of her name as a result of "b" and "v" being the same character in kana, as well as "l" and "r" (i.e. Va-lu-va-li-shi). The "shi" is cut short as a further result of the memory limitations, and likely because "Valvalis" was at least pronounceable. The name is not "Barbaris" likely due to the translator missing the Divine Comedy reference (as they did with Cagnazzo).