A sturdy sword with a wide blade.

Barbarian's Sword (バーバリアンソード, Bābariansōdo?) is a recurring sword in the series. It is generally one of the most powerful swords in the games it appears in.

The Barbarian's Sword is the strongest weapon, providing +125 Attack, 20 Accuracy, +18 Strength, and +15 Stamina. It can be used by the Warrior, Knight, Red Mage, and Red Wizard classes, and is obtained by defeating the most powerful version of Chronodia in the bonus dungeon Labyrinth of Time. As such, the Barbarian's Sword is only present in the PlayStation Portable version of the game and its mobile port.

Barbarian's Sword is a mid-to-low tier (level 24) greatsword, usable by Warriors, Paladins, and Dark Knights. It gives an Attack bonus of +15, and an Accuracy penalty of -5, making it on the whole a fairly standard greatsword in terms of damage at that level—the level 24 Federation Sword actually eclipses it in damage potential, though the Federation Sword is harder to obtain (the blade can only be made through crafting).

The Barbarian's Sword can be found by fighting the Notorious Monster Moo Ouzi the Swiftblade in the yagudo stronghold of Castle Oztroja. Moo Ouzi is a powerful samurai, clocking in at level 30 himself. The Barbarian's Sword is actually the lower-quality weapon one can earn from fighting Moo Ouzi, the rarer, more powerful weapon being the Demonic Sword, a level 31 greatsword which deals more damage, enhances darkness, and deals Dark-elemental damage with each hit.

Neither of those weapons are exclusive, which means that they may be found in Auction Houses by any player.

The Barbarian's Sword is the Warrior of Light's level 100 exclusive weapon, providing +68 Attack, Defense +15%, and a minor counterattack effect. It can be obtained from the shop by trading 31,920 gil, Braveheart, Guiding Light x5, and Protect Orb x5.

The Barbarian's Sword is Warrior of Light's level 100 exclusive weapon. It provides +68 Attack, Defense +10%, and a slight counterattack effect. It can be obtained from the shop by trading 182,800 gil, Braveheart, Guiding Light, and Hero's Hopes x5. 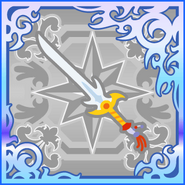 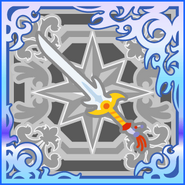 [view · edit · purge]A barbarian is a person perceived to be uncivilized. The word is often used either in a general reference to member of a nation or ethnos, typically a tribal society as seen by an urban civilization either viewed as inferior, or admired as a noble savage. In idiomatic usage a "barbarian" may also be an individual reference to a brutal, cruel, warlike, insensitive person. The term originates from the Greek word βάρβαρος (barbaros).