Hear me, Ramza. For generations, we Beoulves have stood foremost of those who serve the Crown. Ours is the soul of a knight. Become a knight worthy of your name. Tolerate no injustice. Stray not from the true path. You will know the path you must walk. A Beoulve can... can walk no other...

Barbaneth Beoulve, also known as Balbanes Beoulve, is the former patriarch of House Beoulve in Final Fantasy Tactics. He is mentioned numerous times throughout the narrative despite only appearing in one flashback. He is the father of the four Beoulve children: Dycedarg, Zalbaag, Ramza, and Alma.

Barbaneth has brown eyes, and in his scene is shown with a wrinkled brow, a goatee, and light gray hair tied in a ponytail. On his deathbed, he wears a dark brown robe with a pale yellow collar and a high-collared light pink shirt.

Others report Barbaneth strongly resembled Ramza in his youth.

Even on the verge of death Barbaneth remains dedicated to ending the Fifty Years' War, and extends his affection towards all of his children, asking his older sons to watch over their half brother and instructing Ramza to take care of his younger sister. In his final words he entreats Ramza to live up to their house's chivalric ideals and to show his brothers "what it is to be a knight". Dycedarg later characterizes Barbaneth as overindulgent regarding his youngest son, and unambitious in his direction for House Beoulve, claiming that he was content to "watch as hist'ry passed us by".

(Ramza,) The issue of his father's paramour, a baseborn woman of the Lugria family...

War of the Lions game manual

Barbaneth was married to a noblewoman with whom he had his sons Dycedarg and Zalbaag. At some point (either before or after his wife's death) he had an affair with another woman, of the peasant Lugria family, who gave birth to Ramza, and later, Alma Beoulve.

In the outbreak of the Fifty Years' War Barbaneth carried the Beoulve name with honor, fighting gallantly and serving the royal family. He proved himself a fierce warrior, leading the Order of the Northern Sky within the ranks of the Ivalician army against Ordalia. He secured victories where others had perished and his ferocity struck fear in the Ordalian army. After the war, he attained the title "Knight Gallant" for services rendered in the line of duty.

Not long after the war's conclusion Barbaneth fell ill and was forced to retire. While on his deathbed, Barbaneth continued taking reports from Zalbaag and Dycedarg as to the concluding military campaign in Limberry and efforts to broker peace with Ordallia's Lenarrio. He spent his final moments advising his children to carry on the House Beoulve name with dignity and justice. After his final words to Ramza, Barbaneth died peacefully.

In truth, Barbaneth's illness was not of natural causes, but of the poison, mossfungus. His oldest son, Dycedarg, murdered him to succeed him as the head of House Beoulve. Zalbaag later overhears a conversation between Dycedarg and the templar knight Loffrey Wodring and visits their father's graveside to confirm it. Zalbaag returns to avenge Barbaneth's death with assistance from his younger brother, Ramza. Dycedarg, having been corrupted by the auracite Loffrey gave him, transforms into the Lucavi demon Adrammelech and kills Zalbaag, who is later reincarnated as a zombie controlled by the Lucavi to face Ramza in battle. Ramza painstakingly slays him, enabling him to destroy the demon. 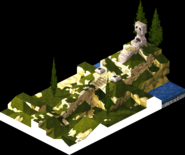 The map of the cemetery where Barbaneth is buried.