Tougher 'n me, and with the rank to prove it!

Bansat is a seeq and member of Clan Centurio. He teams with the party when hunting Gil Snapper in Final Fantasy XII. Bansat will notify the party if the Gil Snapper has appeared in Tracks of the Beast and will also assist in the battle.

Bansat also aids the party in fighting Gil Snapper and three Storm Elementals in the Zodiac versions' Trial Mode Stage 30. He is also one of the seeq fought in Stage 31, along with four Seeq Fishers.

Like other seeq, Bansat is weak to Fire. His level and HP are not displayable by Libra. He will always follow the party leader, but doesn't move as fast. He'll only charge into the nearest monsters when approached by the party.

At a quest named "Wanted: Friends, Kupo!" it is mentioned by Montblanc that Bansat will take care of Clan Centurio while Montblanc was gone. Later at "Champion's Cup", Bansat is shown to be a Viking as part of Clan Centurio's team. A conversation between the two will take place if Montblanc is used on the battle with each side surprised to see the other one.

In battle Bansat is a strong opponent, with a combination of the Mjolnir, Genji Armor, among other equipment and the use of the abilities Pugilist and Absorb Damage, he is a massive tank with prodigious offensive power. 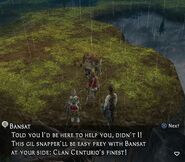 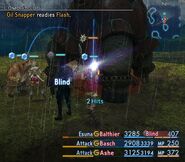