Doomsday appears as a Dark Arts spell usable by the Necromancers in the Game Boy Advance and mobile versions. It costs 66 MP and has power of 254. It is learned from defeating Hades.

Banish Ray is an enemy ability used by Zodiark, which inflicts massive Dark-elemental magic damage to one target within a range of 12 with a power of 240 and CT of 16, usually inflicting 9999 damage. It can also be used by Zodiark when summoned by the player if the target is weak to Dark-elemental attacks or the nearest visible (in the Zodiac versions, it is only used if the target is vulnerable to Dark).

Punishing Ray is an enemy ability used by Forgal in the Weeping City of Mhach, and by the Voidwalker in all versions of the Eden's Gate: Descent raid. Forgal's version of Punishing Ray summons several pillars on the field that requires a single player to stand in to avoid heavily damaging the raid party. The Voidwalker's version summons eight puddles on the field that inflict the Bleed debuff on anyone who stands in them.

Banish Ray I-III are magic attacks available only for to the Deathlord to use. The spells can only be learned from his Necromancer signet. All Banish Ray spells deal heavy dark-elemental magic damage to all enemies and cost 63 MP to use.

Banish Ray is an enemy ability used by the Zodiark (Incubus) Torment Dungeon boss. When used, it deals very heavy dark-elemental magic damage to one target of the player party. 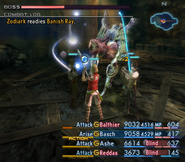