Banish (バニシュ, Banishu? or バニッシュ, Banisshu?), is a recurring White Magic spell in the Final Fantasy series. It manifests a small mass of shining light to strike a foe, being one of the basic means of inflicting light-elemental damage in titles.

Banish is generally associated with White Mages, but it also can be utilized by those using the Knight job in some titles.

Banish serves as the base form of its spell family, being formally introduced into the series in Final Fantasy XI. Since its original appearance, Banish has begun to become more recurring and serves as the earliest means of inflicting light-elemental damage. However, there are cases where Dia replaces Banish as the means of inflicting light damage.

Banish should not be confused with Warp, which has been localized as Banish in several titles; nor is it the same spell as Vanish, which shares a similar name in Japanese katakana.

In addition, several titles have featured unique or alternate upgraded forms for Banish. These spells include unique properties, or are used by specific jobs:

Banish is the first in a series of Light-elemental damage spells available to White Mages and Paladins. It is capable of damaging any creature (with only special exceptions), but it deals 150% normal damage to undead monsters and has a hidden effect of greatly lowering undead creatures' Defense for a brief period of time. Banish is purchasable in all three starter nations for about 162 gil or less, depending upon fame.

Casting Banish with Afflatus Misery active grants a damage bonus to the spell based on the most recent damage taken by the caster. The record of damage taken is reset upon use.

Banish appears as an enemy ability available to the Light Sprite, Corrupted Sprite and Corrupted Pudding enemies. The ability deals damage to a single target. Banish and Banish III are also available in a usable form as Logos actions, both of which inflict a debuff which increases damage to undead targets.

Banish appeared as an ability in the original version. It was a Thaumaturge spell available for use at Rank 1, cost 3 action points to set, and had an MP cost of 10. The ability dealt astral-elemental damage and reduced the defense on a single enemy. After the release of patch 1.20, Banish; along with Banish II, became unusable by any class.

A variation called Strong Banish can be used when two Psyched Up characters cast Banish during the same turn.

Banish is a Bravery attack usable by Prishe. It fires a projectile of light at the opponent. Banish costs 30 CP to equip and 150 AP to master.

Light damage to one enemy

Banish is a Level 2 White Magic attack spell that deals light damage to an enemy. It is learned by most White Mages, but can also be used by others by equipping the Espers Ramuh, Carbuncle, and Lakshmi (if the spell has been learned by that Esper). It costs 3 MP to use.

Banish is an active, light-elemental ability that inflicts magical light damage on a single target for 3 AP. It can be used by Baby Paleberry, Master Moogle★, Odin★, Ponini, Squidraken, Unicorn, and White Chocobo.

Banish has appeared in other Square Enix titles as an ability, referencing the Final Fantasy version of the spell.

Banish appears as a Spirit Magic spell for the Spiritmaster job in Bravely Default II, serving the default light-elemental spell in the title. In addition, Banishra and Banishga also appear as upgrades to the spell, with their final form being Holy. 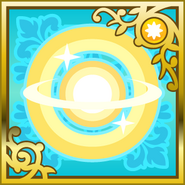 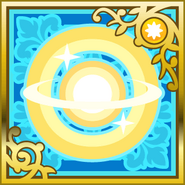