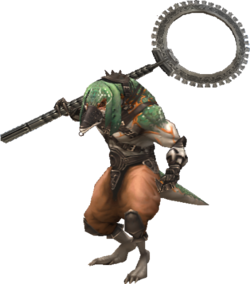 Bangaa, although usually seen in cities employed as merchants and the like, can be encountered as regular enemies in various areas throughout Ivalice in Final Fantasy XII. They can be classified as thieves, pirates, and pugilists.

There are also NPC bangaa that appear randomly in the Dalmasca Westersand and Giza Plains, known as the Rabanastre Watch. These Level 3 NPCs use Jump to attack their foes, and are the player's allies.

Genus: Humanoid
Classification: Bangaa
Humanoid race, their bodies covered in small, hard scales, with distinctive long, drooping ears. Bangaa are nimble and strong, living up to twice as long as the average hume. In manner and intelligence they greatly resemble humes, and as such as the most integrated of the humanoid races in hume society.
Even so, some humes call the bangaa "lizards" behind their backs, but this is considered a slur, and is like to deeply offend any bangaa within hearing.

It was a clement day when my partner and I arrived at Nabudis at the end of a long journey. I remember looking upon her beautiful welcoming streets and realizing no other place could be more fitting a destination. Gathering up what coin we had, we secured residence, and began to look for work. From odd jobs to risky border patrols, we did all, and were satisfied.
Thinking of it now, I realize, I was happy then.

We were not particular in our acceptance of work, and so in a short time amassed enough wealth that we might live in some degree of comfort.
Our residence began to fill with the articles and artifacts of our daily lives, and soon we found our roots sunk so deep in the soil of this city, we could not imagine ever leaving. Though I assisted my partner with work, we gradually came to seek out our own time, and so grew apart. Yet, we were satisfied. Why need this life ever end?

Several years after beginning out life in Nabudis, there came a call for soldiers from the city watch. We had, by this time, made something of a name for ourselves, and so did a summons come to us. We were not born in this city of Nabudis, yet our love or the town knew nothing of this, and we accepted without delay.
I was given to the border patrol, my partner to the defense of the city wall. The night before I was to leave, we ate a splendid meal and drank such wine as we could afford. It was as though we knew it would be our last meal together.

The days of my patrol were harsh, yet we finished out duties, and weeks later, had only to return.
That night, I dreamt.
My partner came to me, trying to tell me something, yet I could hear nothing but the blowing of a distant wind. Perhaps I became homesick as I slept, for when I awoke, my eyes were wet with tears. In the dream, my partner had been unchanged, a perfect memory.
Our feet turned home, all out thoughts flying down the road ahead of us, faster than we might hope to walk, back toward Nabudis.

What awaited us upon our return was not a hero's welcome, but despair. Gone were the beautiful palisades, gone were the families and friends that surely awaited us. Only a wasted, blasted land remained.
Then we saw the people of Nabudis, though to call them that is a jape of the bitt'rest sort. They were the walking dead, hungering for life, and consuming all they found that was light and good. We fought them to save our own lives, and we wept.
Then, among the dead, I saw him. And I could fight no more.

Retrieved from "https://finalfantasy.fandom.com/wiki/Bangaa_(Final_Fantasy_XII)?oldid=3264712"
Community content is available under CC-BY-SA unless otherwise noted.