It takes a lot of nerve to call a Bangaa a lizard!

The bangaa is a race in the Final Fantasy series, primarily from Ivalice.

The bangaa are a lizard-like race, widespread across Ivalice. They have long faces, scaly skin, and tough limbs. They have two long ears dangling from each side of their heads, leading people to call them "long-ears". Their sense of smell and hearing are exceptionally sharp. They have a tall stature and are physically powerful, but their vocal structure makes it difficult for them to cast incantations, limiting their use of magick.

Due to their capacity in brute force, the bangaa are considered the most physically prominent of the Ivalice races. Voices aside, their reptilian appearance make it difficult to distinguish males and females. Their lifespan is roughly 1.5–2 times as long as a hume's.[1]

Calling a bangaa a "lizard" is considered a heinous racial slur. Another lizard-like race exists in Ivalice, generally referred to as the lizardmen, who are more primitive and violent than the bangaa, who resent the comparison. Unlike true reptiles, bangaa can grow facial hair.

The bangaa are covered with scales, and their ears fall below their lengthened muzzles. Their intelligence and manners are similar to humes' and it is often said bangaa are the race best integrated within the humes. Some humes are ill-disposed to the bangaa and speak about them using the slur "lizard" when far enough from their sensitive ears. Some hume-distinct nations, Archadia for example, prefer that bangaa not enter their ranks.

Bangaa can live up to twice as long as the average hume, but seldom procreate. They are strong and have fine senses of hearing and smell. They speak in a distinct, guttural voice, in a fashion similar to real-world Scottish accents. The bangaa vocal cords are not as clear and refined as those of the other races, and therefore cannot speak quite as well. This makes it difficult for them to use even the most basic magick. However, some bangaa do become sorcerers, using magickal formulas specific to their reptilian language.

Bangaa are separated into four sub-branches: the Bangaa Ruga with yellow-brown skin and shorter ears, the athletic Bangaa Faas with bronze skin, the Bangaa Bista with copper-colored skin, and the Bangaa Sanga with ash-colored skin. There are also breed mixes.

In the bangaa language it is said that "Faas" may mean soldier or "a strong sense of justice". Bangaa Ruga are more gentle and are more likely to be instructors or monks. The Bangaa Ruga and Faas generally make the laws and keep order among the bangaa. The Bangaa Bista and Bangaa Sanga tend to lead more laid-back lifestyles, making it easier for them to live and interact comfortably with humes. While some bangaa (for example the Ruga) may become rebels or fighters, other bangaa have been known to live as pillaging thugs.[1]

All bangaa are weak to the element of water.

The bangaa beastmen tribe appeared in the Source with the Return to Ivalice sidequest introduced in 4.1. They look similar to their counterparts from the Ivalice Alliance series, and the named bangaa fulfill roles similar to their namesakes in Final Fantasy XII due to the questline's story being an altered version of latter's events. They mention previously being fusiliers and harboring shame for not being able to keep their promises to the prince.

Bangaa make up twenty percent of the population of Dalmasca on Hydaelyn, and were once a common sight in the kingdom it was conquered by the Garlean Empire. They were integrated into Dalmasca long ago, but before that they were led by religious leaders of yellow-brown hued clans. Though they live twice as long as the average Hyur, they breed rarely and so have a comparatively low population.

According to Bwagi, the Bangaa are mammals, not reptiles. When their scant fur sheds, patches of it do not grow back. Instead the skin grows callous and appears scale-like. They mature by age fifteen, shedding their skin once a year and it grows less frequent after that. Their strengths are their superior senses of smell and hearing, as well as their physical prowess. Their greatest weakness is how the unique structure of their vocal chords make the incantation of spells difficult. Though once it was possible to distinguish Bangaa clans by color, after many years of intermingling such distinctions have become meaningless. Nevertheless, the Ruga had yellow-brown skin, the Faas bronze, the Bista red-brown, and the Sanga ash gray.

Their tough bulk and intimidating look makes bangaa best suited to jobs that require brute force, like the Gladiator and Dragoon. This makes them a perfect match for the nu mou, who are spellcasters with low physical stats. Bangaa's rough vocal cords make it hard for them to chant spells, but they do have a magic-based class, the Bishop. When they speak, they usually lengthen the "s" sound (eg.- "takes" becomes "takess").

Bangaa is the only race that doesn't have an exclusive playable character.

The bangaa Totema is Adrammelech.

Tough scales cover this reptilian race head to toe. Their violent tempers, powerful physique, and love of the battle make them at home on the front lines.

The bangaa are physically adept and have three new jobs: Master Monk, Cannoneer, and Trickster. While they are the only race whose job list is made up of entirely bangaa-exclusive ones, some of them do share common abilities with their counterparts in the other races.

Bangaa party members can be obtained in these locations during Greenfire or Bloodfire:

Bangaa appeared as part of the Crystal Defenders collaboration. 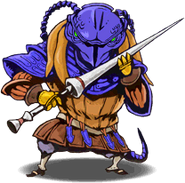 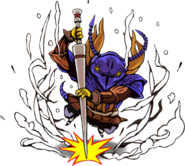 A bangaa from Final Fantasy XII: The Zodiac Age.

Bangaa intro from Tactics A2.