A sky pirate who boasts [that] his airship, the Strahl, is the fastest in all Ivalice. Balthier prizes freedom above all else, swearing allegiance to neither king nor kingdom. A true and steady ally, he is the quintessential pirate with a heart of gold.

Balthier is a playable character in Final Fantasy Record Keeper who could initially be recruited during the Challenge Event The Dreadnought Leviathan. He has since appeared in both Tempered Resolve and Consorting with Sky Pirates.

Dashing and debonair almost to a fault, Balthier is positioned as one of the swiftest attackers and has a broad skill draw, though he is somewhat weak defensively. A gun in his hands should render his shortcomings moot, even if said gun isn't as strong as a sword or a spear, both of which he can use. He has the somewhat unusual role of a Spellblade as well, which may be useful when close-range fighters are unable to hit a target with an elemental weakness.

His default Soul Break is Fires of War which at the expense of one Soul Gauge segment deals physical damage to all targets equal to 110% damage potency of a conventional attack.

He can equip the following armor types: hats, light armor, robes, and bracers. 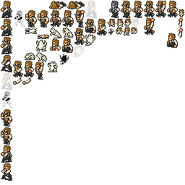