Balthier was to appear in this cancelled game, where he was to "sweep in to save the day" near the end. The game's premise was to defend a cliffside fortress from invading marine forces of a vengeful sea king in the far uncharted reaches of Ivalice, the defense being led by Basch fon Ronsenburg. It was planned that airships would be inoperable around the fortress because of a flying continent above making the area even more isolated from the rest of Ivalice, but the airspace would be opened during the game allowing with Balthier to arrive and rescue the others from the brink of defeat.[1]

Balthier is a secret playable character, in the War of the Lions remake, and can be recruited by Ramza Beoulve. He can join the party during Chapter 4, after checking the rumor "Rash of Thieves" which occurs in the Merchant City of Dorter. When the thieves spring their trap and attack Ramza's party, they realize they have the wrong man, and Balthier shows up late on scene, and later is willing to join the party. His zodiac sign is Leo.

Balthier's job is Sky Pirate, and as such, wields several blades in battle. He can potentially do the greatest amount of damage in the game with Chaos Blade and Barrage.

Balthier appeared as a recruitable character.

Balthier makes a cameo appearance as one of the tutors of Abilities. He appears alongside Fran and first tells the player; "to obtain more abilities, you need to level up! Also, he explains that just learning new abilities is not enough, and one needs to equip them for them to work. He commends himself as the leading man who can handle the extra abilities. Fran calls him as "Mr. Spotlight".

There is a letter sent by a moogle named Sablé regarding the previous letter he sent entitled "Watching You, Kupo". The letter is about when Vaan, Balthier, Fran and Basch went to Bhujerba's Lhusu Mines to save Penelo from Ba'Gamnan's grasp.

New intel, kupo! The kidnappers designated a a sky pirate for the rescue, kupo. What a relief, kupo! I was able to keep my cool thanks to your responses, kupo. I hope we can have a more leisurely chat in the future, kupo!

Balthier appears as a playable character.

Making himself known as a chivalrous thief, this sky pirate travels the skies in his beloved Strahl. When he sneaks into the Royal Palace of Rabanastre in pursuit of treasure, he stumbles across both Vaan and Ashe, and the strange pair joins him and his partner Fran in their travels. Yet when he realizes the part that his brilliant father Cid has played in the Archadian Empire's expansion, he will have to take action if he is to be a true leading man.

Balthier appears in the iOS release as a purchasable character.

As the fastest pirate in the skies, this dashing leading man goes wherever his heart desires in the Strahl. He loves freedom more than any other, yet he is bound by a past heavier than most. In his eyes burns a fierce, new determination...

Balthier is an unlockable character, and is unlocked by collecting Turquoise Crystal Shards.

He is a Speed and Balance oriented character. 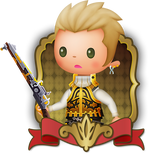 Balthier appears as a playable character.

Known as the "swift sky pirate," the Strahl airship captain who accompanies Vaan and friends on their voyage. Has made a name for himself as a freedom-loving Robin Hood with no ties to any nation or organization.

Balthier appears as an ally and a summonable Legend. He is depicted in his default Final Fantasy XII outfit. His ability is Element of Treachery. His EX ability is Tides of Fate. He was first introduced as an event ally in the event, Final Fantasy Special Event Part 2 - Showdown, in which he was unlocked automatically as a bonus character. Leveling him up to up to 99 in these events granted the player his individualized SSR weapon, Spica. In battle, Balthier is armed with his pistol and uses the ability Element of Treachery.

This fast-flying sky pirate is often seen with what appears to be a giant bunny.

Balthier is an exclusive character only available from the Premium Character Shop as a random downloadable content. He uses the Fires of War ability during battle.

Balthier is a playable character who could initially be recruited during the Challenge Event The Dreadnought Leviathan. He has since appeared in both Tempered Resolve and Consorting with Sky Pirates.

Balthier has multiple Wind cards. The wind element may derive from his career as a sky pirate.

Balthier appears on a Triple Triad card in the version available via Final Fantasy Portal App.

Balflear appears as a card in the Ivalice Special Arena has a limited-time special arena with eighteen floors.

Balthier appeared as part of the Final Fantasy collaboration.