Cid Pollendina: Oh, shut up and help me remodel the Ballen Passage Entrance page!
Please expand this article into a full one. The following tasks need to be completed:This request can be discussed on the associated discussion page. Remove this notice upon completion.

Ballen Passage Entrance is a location in Final Fantasy Brave Exvius, which along with Ballen Passage Depths make up the Ballen Passage that connects Industrial City Dilmagia, located to the west of the tunnel, and Maranda Coast to the east, thus bypassing Dirnado's extensive mountain range.

The party arrives at the passage's entrance and Rain asks Fina (who was seemingly possessed) if she remembers anything about what happened in Maranda Coast, but she doesn't and apologizes. Rain tells her not to worry too much about it. Lasswell wonders if they are in the Dirnado mainland, as they can't tell after their shipwreck. Fina notices the tunnel's entrance and its many supplies, which they decide to follow.

As they go deeper into the tunnel, Rain apologizes to Fina for leaving her alone on the shores, but she says she knew the two would come for her. Lasswell, for his part, dwells on the names 'Aldore' and 'Hess'; Rain says he hasn't heard those names before, but wonders who they are and what the Veritas are up to.

When they reach a crossroads at the middle, Lasswell notices the wind is quite strong there for a tunnel, and suspects it is due to the Wind Crystal. They decide to follow the path from which Fina feels an odd breeze, which turns out to be the correct one as they come out at Dilmagia.

Deal light damage to an enemy 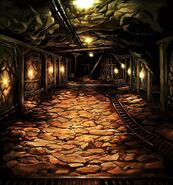