Cid Pollendina: Oh, shut up and help me remodel the Balfonheim Port page!
Please expand this article into a full one. The following tasks need to be completed:

A city of men without countries. Pirates of the sea and of the sky.

The Port at Balfonheim, commonly referred as Balfonheim, is a location in the land of Ivalice in Final Fantasy XII. It is a town full of sailors and pirates, led by the infamous Reddas. Despite being located in Archadian territory, Balfonheim stays out of the Empire's conflicts. Instead, it is a town willing to offer its services to whoever wants them, such as the Resistance.

It is possible to visit Balfonheim before the events in Draklor Laboratory. If the player takes a chocobo from Phon Coast and rides it all the way across the Tchita Uplands to the east, they can enter the Cerobi Steppe that has a way into Balfonheim. If the player comes to Balfonheim at such an early time, only the Sea Breeze Lane area is explorable.

Prosperous port on the Naldoan Sea renowned for its rich fishing grounds. In addition to fishing, the port is known for its shipwrights and their numerous contributions to the advancement of seacraft. Though demand has dropped with the spread of airships, the wrights are still able to turn a profit on their craft. The power in Balfonheim rests with the sea captains and pirates of wealth. Though belonging in name to the Archadian Empire, well-placed regular bribes have ensured the city autonomous governance. The city itself is small, being a classic port town, with many stone-cobbled alleyways winding between buildings which hug the curve of the hills. Fresh seafood can be found in the market stalls daily, along with many other items brought by traders and pirates. Several waterways run through the city, some carrying drinking water, others used as canals for the transport of goods. The manse of Pirate King Reddas stands in the western quarter of Balfonheim.

As Ashe's party storms the Draklor Laboratory in Archades, they find Reddas there after the same goal: to destroy the Empire's nethicite. Dr. Cid escapes with the pieces of deifacted nethicite, telling the party he's off to Giruvegan, and Reddas takes the party to Balfonheim on his airship.

Reddas tells the party Marquis Ondore has already been looking for the sky pirates' assistance to join the Resistance. The war seems closer than ever, but as long as it's Cid who holds the nethicite and not Vayne, there may be hope. The party decides to follow Cid to Giruvegan, but Reddas refuses to join them, saying he has other plans.

After returning from Giruvegan the party ends up in Balfonheim and finds Reddas has sent a fleet to Ridorana Cataract, but it caught trouble. After hearing Ashe's plan is to destroy the Sun-Cryst, the motherlode of all nethicite in Ivalice, Reddas joins the party to aid them and gives the party a skystone he stole from the Draklor Laboratory so that the party's airship may fly on the jagd.

Reddas sacrifices himself at Pharos, leaving Balfonheim without a governor, but its people honor Reddas's memory and stay true to the path Reddas had set before his death.

Balfonheim is located at the southern tip of the continent of Valendia, in the Archadia region, near the Cerobi Steppe. Balfonheim was a place full of troublemakers and cut-throats until Reddas came and got rid of the riffraff, making it a haven to pirates of both sea and air.

From the aerodrome one can fly to Archades, Bhujerba or Nalbina for 180 gil and dock their private airship for free.

In the Zodiac versions, the treasures are different, and contain rare consumable items.

The Vyraal is a Rank V Mark whose hunt can be undertaken after the events in Draklor Laboratory are complete. The Vyraal can be found in The Northsward area of the Cerobi Steppe, and enemies will be cleared out when the player enters it. The hunt is petitioned by the Viera Wayfarer in the Whitecap pub in Balfonheim. The player will also receive the Viera Rucksack after the battle, which the Viera Wayfarer will take back when the hunt is reported. She lets the player keep the Dragon Scale, item part of the Wyrm Philosopher quest.

Pylraster is a Mark whose hunt becomes available after the events in the Pharos. The hunt is petitioned by Rikken, but he is not sure where to find it. The player can find the Pylraster at the entrance to the Pharos in the section They Who Thirst Not. The player can use the Gate Crystal at the First Ascent, and go outside to find the Mark.

Ixion is an Elite Mark found in the Penumbra-Interior area of Subterra at Pharos. The hunt becomes available after the events in the Pharos. It is petitioned by Whitecap Wench at Quayside Court - The Whitecap. Ixion can be found at Pharos's Subterra, on any of the three floors.

When the party leaves Reddas Mansion after the first time they visit Balfonheim, Rikken and his gang will be outside and give Vaan information about the Feywood. If Vaan talks to him a couple of times, Rikken will invite him for a footrace minigame. The minigame consists of 100 levels that reward the party with treasures, including the rare loot Slime Oil. If the player did not steal Slime Oil from the mark Orthros, the only other way to obtain one is to win the tier 90 footrace.

Racing requires pressing two buttons alternately. Rikken is normally in the lead, and travels at about the same speed as Vaan, making it difficult to pass him until near the final turn, where he slows down for a second. Elza is not a threat on her own, but by progressing in the minigame, she may take the last turn of the race very tightly. If this outcome happens when the player must go out of their way to make Raz trip, she can steal the victory. Raz is the fastest of the three, but because he trips a lot, he will almost always lose the earlier races. Beyond the 40th level Raz no longer trips on his own (apart for one fall at the beginning) and Vaan has to prompt it by intercepting Raz's trajectory or approaching him from the side. If the player fails to stop him, Raz will likely win the race.

A cockatrice called Moomer is in the chocobo pen at Sea Breeze Lane of Balfonheim. The player must talk to the Chocobo Wrangler by the chocobo pen and show her the Feather of the Flock, then talk to the Miffed Moogle, and then Gurdy, to receive the Defender. The Feather of the Flock item, needed to talk to cockatrice, is found in an urn in the Giza Plains Tracks of the Beast area during the Rains.

The fishing minigame is played in the South Bank Village of the Dalmasca Estersand. To begin the fishing sidequest, the player must have completed the Cactuar Family sidequest and the portion of the game's storyline at the Draklor Laboratory. After speaking with Ruksel at the South Bank village, the player must travel to the Port at Balfonheim and speak to the Fishing Enthusiast outside of the Aerodrome.

The player must talk to him twice and ask about the fishing rod, then run to the Aerodrome's entrance and back to the same spot without leaving the area. The Muramata fishing rod will be near the wall where she was sitting. The player can return to Ruksel at the Dalmasca Estersand to begin the minigame.

A treasure containing 5040 gil (without Diamond Armlet) can be opened near him.

The map can be bought Sea Breeze Lane for 80 gil. The map below is for the original version; the Zodiac version has some differences in treasures (see above). 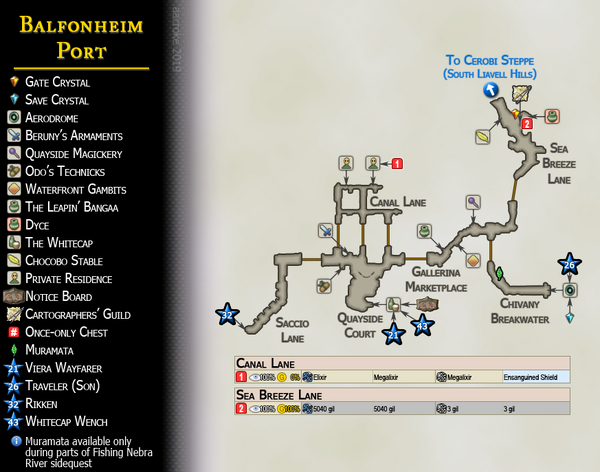 "The Port of Balfonheim" from Final Fantasy XII 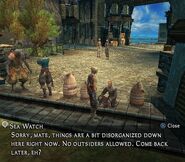 Promotional artwork of the party at Balfonheim by Yoshitaka Amano.

The name is a combination of three German words: Bald ("soon"), Von, pronounced "Fon" ("of"), and Heim ("home"). Therefore, the city's name means "Soon of Home", a fitting name for port city.