Only fools would dare oppose the almighty will of Baron.

Baigan is a character in Final Fantasy IV and Final Fantasy IV: The After Years. He is the captain of the guards in Baron, and loyally serves the king. Baigan is a blond man who wears a red armor with silver shoulder pads and silver boots. He has brown eyes and a long, red cape. Baigan is loyal to Baron, warning the king that Cecil has "developed quite a rebellious air."

When Cecil Harvey returns to Baron with the Crystal of Water, Baigan notices something wrong with him. Baigan takes Cecil to see the king, who is actually Cagnazzo in disguise, one of the Archfiends of Elements. Baigan warns the king that Cecil has become defiant, and the king agrees. Cecil hands the Crystal of Water to Baigan, who passes it on to the king.

Cecil asks why he has to rob Crystals from innocent people. The king discharges him from the captainship of the Red Wings, and orders him and the Dragoon Kain Highwind to hunt eidolons and to deliver a Carnelian Signet to Mist.

Later when Cecil, now a Paladin, sneaks into Baron in search of Cid Pollendina, he is accompanied by Tellah, Yang Fang Leiden, Palom, and Porom. They meet Baigan in the castle hallway, and he convinces Cecil that he is not under Golbez's control, because he is the captain of the guard. Cecil asks for Cid's location and Baigan claims he attempted to find him but he and his men were attacked, and that he is the only survivor. Cecil asks for his help, and Baigan obliges. Palom and Porom smell a monster in the area, and the smell is strongest near Baigan. Baigan reveals he is an ally of Golbez after all, and that Golbez has granted him a wonderful power. He transforms into a monster and Cecil's party kills Baigan. Cecil is shocked that even a loyal man like Baigan would work for Golbez.

Baigan is fought as a boss in the Castle of Baron. A message pops up saying that Baigan joins the party, but he doesn't actually become a party member; he only "joins" the party in an attempt to catch them off guard.

Main article: Baigan (The After Years)

Baigan is a boss in the Subterrane. He is fought in the same manner as in Final Fantasy IV.

Baigan, together with Right Arm and Left Arm, is the first of two bosses fought in the Record of Baron Castle

This is most likely going to be the player's toughest fight when first approached. Not only does Baigan use powerful attacks and spells, but he also has two regenerating arms as sidekicks doing most of the dirty work for him, and he also Reflects back any magic cast against his body. Plus, there's another boss fight following this one. This creates a dilemma: should the player take out the arms first, or the main body? The answer: do both! The arms will explode if left alone, or respawn if taken out before the main body. All three parts are weak against Ice, but after the first cast on the body, he will set up the Reflect wall. Neither the Shiva summon nor spellblades trigger Reflect, but Shiva might take out both arms, causing them to respawn. To solve the puzzle, the player should whittle away at the arms until they are within one strike of a kill each, then focus on the main body until it also can be killed in a single blow. If a Summoner is up next, use Shiva and score the victory. 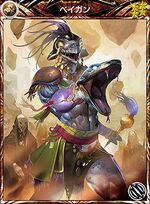