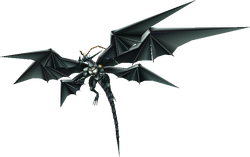 Bahamut ZERO's summon sequence has it flying through space and launching a beam of energy through the atmosphere. This attack is called Tera Flare and it deals piercing magical damage. Bahamut ZERO costs 180 MP to summon, and its spell power is equal to 7.5x the base magic damage.

Bahamut ZERO is the last Summon Materia to become available since the player must have first done all the Huge Materia sidequests, during which time the player can obtain the Shinra Sub and breed chocobo to get to places where the other Summon Materia are located.

Bahamut ZERO appeared as a non-elemental summon and the game's strongest summon. It is a stronger version of Bahamut and lacks the original version's Comet-elemental nature. In order to summon Bahamut ZERO, players were required to have four Ultima materias equipped to their main weapon in battle and have the materia power gauge at max. The summon could easily hit the max damage cap and could be summoned during the optional Jade Weapon fights.

This Bahamut-class Eidolon belongs exclusively to Dr. Arecia Al-Rashia—and, much like its owner, nearly everything about Bahamut ZERO is shrouded in mystery. Not even high-ranking Sorcery officials are privy to details about this Eidolon. All that is known about this fantastic creature is that its abilities are on an entirely different level than those of the dominion's other summoned warriors. In the Battle of Judecca, Dr. Al-Rashia summoned Bahamut ZERO, who in turn came to Class Zero's rescue and slayed the Azure Dragon l'Cie, Shinryu Celestia.

Bahamut ZERO appears at the end of Chapter 5 if Class Zero falls to Shinryu Celestia. It is the strongest Bahamut model exclusive to Arecia Al-Rashia. It is a LV99 Eidolon who uses a physical attack, Grand Buster, and a breath attack. The first tier breath attack is Megaflare. By fully charging Megaflare it turns into Giga Flare, and fully charging Giga Flare turns into Tera Flare that summons all Bahamuts to its side to unleash a concentrated salvo of energy on the opponent. If Bahamut ZERO is summoned, the player must unleash Tera Flare to complete the mission.

Although Bahamut ZERO does not appear as a usable Esper in Final Fantasy Airborne Brigade, the summon does appear during Tifa's Tera Flare UR+ Legend summon. 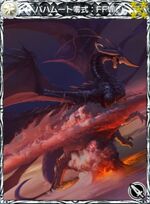 An otherworldly entity whose light shines upon those who live by the sword.

Bahamut ZERO: FFVII is a 3 star light-elemental ability card, allowing the player to use the Light Fury light Warrior ability. Its card can be upgraded to 5 stars through ability augmentation.

The card was originally added into the game's draw shop in late 2016, however it has since been removed as a obtainable card through this method. The only method of aquiring this card is now through the game's ability shop.

Bahamut ZERO appears as a hazard for the Midgar stage. If his Summon Materia is used, Bahamut will use Teraflare to create a huge pillar of light in the middle of the stage, causing devastating damage to any players other than the Summoner caught in it. Bahamut ZERO also destroys the Midgar background with the attack.

As of version 1.10.0 in Smash Ultimate, Bahamut ZERO also appears as a Spirit, represented by a giant Ridley. 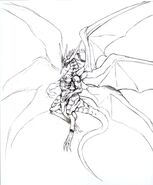 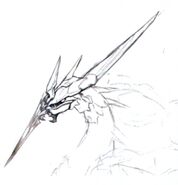 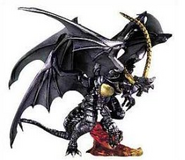 The 零式 (Reishiki?) in Bahamut ZERO's Japanese name comes from the A6M Reishiki Kanjō Sentōki (零式艦上戦闘機), a Japanese fighter plane. In Final Fantasy Type-0 its inclusion also alludes to the recurring theme of "zero" in the game.