Bahamut SIN (バハムート震, Bahamūto Shin?, lit. Bahamut Tremor) is a form of Bahamut in Final Fantasy VII: Advent Children. It is summoned by Kadaj to destroy the Meteorfall monument in Edge, as well as wreak havoc on the populace.

The party members of Final Fantasy VII engage it in battle and it is ultimately destroyed by Cloud's Climhazzard Limit Break. 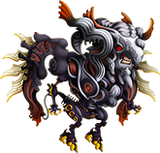 This great beast wields its formidable powers for the one who summons it. When summoned by Kadaj, this king of dragons runs amok killing and destroying, until at the very peak of its fury, it spews forth a brilliant blue light...

Bahamut SIN appears as an enemy in Battle Music Sequences.

Bahamut SIN appeared as the final boss of the The Lone Wolf's Lament - Cloudy Wolf Challenge Event in the "Monumental Battle" dungeon. While it can use Megaflare as a normal ability, as well as Gigaflare and Petaflare as interruptible charged abilities.

The Bahamut SIN figurine measures approximately 7" tall with a display base, and is sculpted for Kotobukiya by Takayuki Takeya. Bahamut SIN is also part of the Creatures Kai Vol. 1 collection.

The 震 (Shin?) in Bahamut SIN's Japanese name derives from the Japanese fighter plane, the J7W1 Shinden (震電). 震? means shake or tremor. It is also likely a pun on the English word Sin which transcribed into Japanese (シン, shin?) would be pronounced the same. Sins is a theme of Advent Children.

Bahamut SIN's design was inspired by the culture of the Jōmon period in Japanese history, as its designer Takayuki Takeya felt that Bahamut's image of a winged dragon was set, and he wanted a particular aesthetic to make Bahamut SIN more unique from other incarnations.