Super Famicom
Bahamut Lagoon (バハムートラグーン, Bahamūto Ragūn?) is a video game for Super Famicom was created by Square Co., Ltd.. It was never officially released outside Japan, but was fan-translated by a group known as DeJap, and later again by a group led by Near. It is often called Bahalag (バハラグ, Baharagu?) by Japanese fans.

While the game has no relation to the Final Fantasy series, it incorporates several staples from the series, most prominently the use of summons.

The game's development staff included many key members from the Final Fantasy series, including Final Fantasy creator Hironobu Sakaguchi, as a supervisor, Kazushige Nojima as director, and Motomu Toriyama as a story planner. 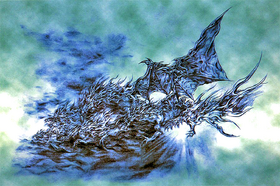 The game is a turn-based strategy game. It combines classic RPG battles with tactical turn-based strategy, much like Final Fantasy Tactics. Characters have typical RPG statistics such as HP, MP (for mages), SP (for fighters), and EXP. The player can equip equipment and use consumable items. Dragons also fight alongside the player's party as separate units, and the player has minimum control over them, and the dragons will randomly use one of their abilities to assist/help the player.

The battle system consists of turn-based 2D map movement and possible engagement in RPG battles typical of the Final Fantasy series. The player and enemy each take their turns, once all units from either the player or enemy all took an action, the phase ends for them and the opposing party will have their turn. The player can, for instance, while on the field in a similar fashion to the Tactics series, be able move the player's squad (a maximum of four characters), then choose from the main commands: Move/Attack (repalce Move when right next to enemy party), Field, Dragon (dragon setting), Party (opens the main menu), and End Turn. The Field option will open a sub menu where the player will find the party's abilities such as: Swordtech, White Magic, Black Magic, Red Magic, Summon, Dance, Destroy, and Javelin. Abilities used on the field can cause effects to the surrounding environment. For instance, Fire abilities can set forests and grass on fire and deal damage to units standing on these tiles, Water abilities can freeze water and create ice bridges, while Thunder abilities can destroy buildings and bridges.

Once the player enters a battle in a similar fashion to the Final Fantasy series, the player's party will face the enemy party and the usual commands: Attack, Item, Defend, and the specific unit's special abilities such as White Magic will be present for those characters. Both parties will act once before the engagement ends. Every action taken will yield EXP as well as items and GP.

When the player is not within the field of battle, they can interact with their characters and NPC and move around a limited area, buy/sell items and equipment like any normal RPG. They will also be able to feed the dragons. Dragons will eat anything found within the player's inventory, such as weapons, armor, and consumable items. Raising the dragons by feeding them items is an important part of the game as it will improve their stats as well as affect their behavior on the battlefield, and will also transform into new more powerful forms as they grow. Dragons have their own stats and they also gain experience when they take actions within the battlefield just like the player's parties. Each party has a dragon assign to it, and if a party's dragon is defeated. The party will lose the ability to use their abilities for the remainder of the current battle.

Some survivors of Kahna, together with some mercenaries, create a resistance group. Flying the skies of Orelus with their airship, the Fahrenheit (Farnheit in the English fan translation due to space constraint), then try to liberate the lands. However, they stumble onto an even larger plot that might prove to be the end of the world. 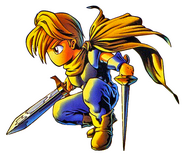 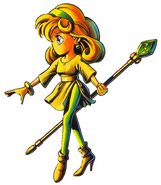 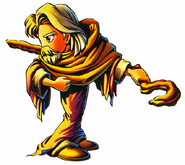 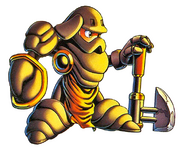