Bahamut Fury is a boss in Crisis Core -Final Fantasy VII-. It is summoned by Genesis and fought in the Shinra Building. It is fought three times in the game, and Zack can add it to his DMW after defeating it in Mission 8-5-6.
See also: Bahamut Fury

The player should start by casting Regen and then assaulting Bahamut Fury with sword attacks. The player should be prepared to dodge or defend whenever it begins to prepare its special attacks. Elemental damage is halved so it's probably a better idea to use only physical attacks. 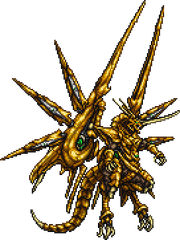 Retrieved from "https://finalfantasy.fandom.com/wiki/Bahamut_Fury_(boss)?oldid=3239195"
Community content is available under CC-BY-SA unless otherwise noted.