Bahamut Fury (バハムート烈, Bahamūto Retsu?, lit. Bahamut Fury) is a recurring entity in the series. It is a form of Bahamut originating in Crisis Core -Final Fantasy VII-.

Bahamut Fury is a much larger golden version of Bahamut that uses a new attack called Exaflare, comprised of a blast from the planet's moon that's triggered by Bahamut Fury's own energy blast. Both Bahamut and Bahamut Fury are added to the DMW by obtaining the appropriate Materia.

In battle, along with the standard magic attacks and claw swipes, Bahamut Fury jettisons the six spikes on its wings at enemies in a powerful attack known as Hexafang. The same jettison is used in the animation for Exaflare.

The power of Exaflare is as follows:

Bahamut Fury is a Boss Monster, exclusive to "Bahamut Fury" event. It will fly through the map, occasionally casting Exaflare in areas with Candidates as long as it is not engaged in battle. Bahamut Fury behaves exactly as Bahamut, with the exception of having much more health and spell effects being golden instead of purple. It has very high defense and is not weak to anything. 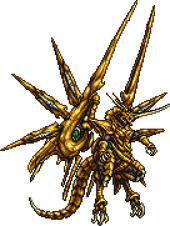