Cid Pollendina: Oh, shut up and help me remodel the Bahamut (World of Final Fantasy) page!
Please expand this article into a full one. The following tasks need to be completed:This request can be discussed on the associated discussion page. Remove this notice upon completion.

One of the Pleiad's seven. Self-proclaimed king of pretty much whatever he feels like. Has a bit of an anger management problem, so be sure to take a few steps back when his temper megaflares.

Bahamut , also known by his true name Tiababylo, is a character in World of Final Fantasy. He is one of a group of powerful Mirages, known as the Pleiad's Seven.

A Series Regular
The classic of classics, Bahamut has had a place in the FINAL FANTASY universe since the very beginning. "King of Dragons," "The First Sire," "Hallowed Father to all Eidolons"—let's just say he's managed to collect a lot of imposing names over the years.

And it's no wonder players keep welcoming him back with open arms. He's a dragon. With wings. And he breathes fire—fire so hot that it's mega fire. Plus people keep giving him cool prefixes and suffixes like "Neo" and "Zero." No eidolon has ever had it so good.

Naturally, with a flashy history like that, the Grymoirian Bahamut also had to be dialed up to eleven.

Tiababylo
You might think the name comes from "Tiamat" and "Babylon" or something like that, but we can assure you, it's utter nonsense. Probably. Anyway...

Bahamut hails from the world of dragon kings, a fearsome place inhabited only by those with near-divine power. Most of these dragon kings have rather short tempers, so you can imagine what happens when you put them together in the same room. It's a constant free-for-all where the weak are meat and only the strong survive.

Sixteen of them proved themselves to possess power far greater than the rest. Among these sixteen were Tiababylo, one of Grymoire's Pleiad, and Brandelis, the future Exnine Knight.

Tiababylo was enraged to learn Brandelis had begun calling himself "king of Bahamut" even though the struggle for dominance in their homeworld was nowhere near finished. Tiababylo did not know that in another world, his rival had bound himself to man and cyborg and become an Exnine Knight. Their petty struggle was no longer Brandelis's concern.

Brandelis's Name
"Brandelis" comes from the Exnine Knight's esper name; his human name was "Efrawg." Pellinore and Segwarides also took their esper names, and not their human names "Pwyll" and "Epona." Thus, it would seem that all three associate more with their eidolon sides than their human sides.

Perhaps this is why Pellinore, before attacking Eiko, asked Fenrir if they were truly enemies. Shouldn't he side with a powerful esper like her instead of a human? This goes to show Pellinore has abandoned her humanity altogether. 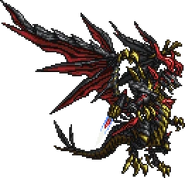 Bahamut as he appears in-game.

Wallpaper for World of Final Fantasy Maxima from official websites.