Held in duress for aeons within the lesser moon, Dalamud, the elder primal Bahamut broke free of his captivity when the celestial body was wrested from the heavens to descend upon the Battle of Carteneau. Once freed, the terrible being wrought fiery destruction across the length and breadth of Eorzea, his devastating rampage marking the beginning of the Seventh Umbral Era. In the midst of the chaos, however, Bahamut was enveloped in a blinding white light and abruptly disappeared from the skies. None claim to have seen the primal in the five years since.

Originally one of the First Brood of Midgardsormr, Bahamut perished during the twilight of the Third Astral Era while defending Meracydia from an invasion by the the reborn Allagan Emperor Xande who set about his campaign making a covenant with the Cloud of Darkness. Tiamat led her remaining children in summoning a primal in the original Bahamut's image to "resurrect" him; the summoned Bahamut, however, was nothing like the actual Bahamut. Despite the new "Bahamut's" efforts, the Ascians taught Xande the means to subdue the Dreadwyrm with the Allagan machine Omega, resulting in the primal being incarcerated in an artificial satellite called Dalamud to collect solar energy for the benefit of the Allagan Empire.

To ensure the primal would remain in place, colossal neurolinks held Bahamut in restraint while captive dragons were kept aboard the space station in stasis to keep him summoned perpetually. Having embraced nihilism while brooding over his mortality, a rebellion having begun among the people, Xande tried to summon the Cloud of Darkness to Hydaelyn by channeling the amassed energy from Bahamut into Syrcus Tower. As this exceeded its capacity the excess of energy caused a devastating earthquake that ruined the Allagan civilization and ushered the Fourth Umbral Era.

As eras passed, Dalamud's origins were forgotten and it became known only as "Menphina's Loyal Hound." At the end of the Sixth Astral Era, the Garlean Empire began Project Meteor under Legatus Nael van Darnus, whose family inherited knowledge of Dalamud's nature and sought to bring it down to eliminate the primal threat in Eorzea. Though the Lunar Transmitter that controlled the moon was destroyed, van Darnus used the spell Meteor to keep it on a descent trajectory.

As he was confronted by the adventurer atop Rivenroad, Nael exhibited a fanatical devotion to Bahamut and was bathed in the primal's power when he attempted to kill the interlopers as Nael deus Darnus. Though Nael was defeated, Dalamud's descent could not be stopped. The Archon Louisoix Leveilleur attempted to summon the Twelve to halt the calamity, using the prayers for a realm reborn.

As the Grand Companies engaged the remnants of Nael's VIIth Legion at the Carteneau Flats, Dalamud broke apart with Bahamut freed to exact his wrath on the realm. Though the ritual failed, watching the primal terraform much of Eorzea through his destructive power, Louisoix was infused with enough aether to defeat Bahamut single-handed.

As no one witnessed Bahamut's defeat, people assumed the primal disappeared without a trace in the aftermath of the chaos. After the defeat of Gaius van Baelsar and the declaration of the Seventh Astral Era, the adventurer is directed to the Binding Coil of Bahamut where the Elder Primal's heavily damaged body ended up while Louisoix, who had transcended his mortal existence into the primal Phoenix, reveals the events of the Seventh Umbral Era.

The captive dragons of Meracydia within the Coil are subjected to unending agony to maintain the Elder Primal's physical form, and Bahamut is slowly regenerating to resume his attack on humanity. An incarnation dubbed Bahamut Prime is fought in the Final Coil of Bahamut within the crystal of Bahamut himself before the Elder Primal is finally allowed to rest in peace.

Bahamut is indirectly mentioned by Hraesvelgr when he refutes Ysayle's claim to be Saint Shiva reborn, stating the primals were just fanciful imitations of the originals. Tiamat later relates to the adventurer how the Ascians were responsible for both Bahamut becoming a primal and his incarceration within Dalamud.

Later, atop Baelsar's Wall, Ilberd revealed his intention of summoning something greater than dread wyrm of the Calamity to liberate Ala Mhigho. Using both the Eyes of Nidhogg and the sacrifice of himself and his followers, he successfully summoned the primal Shinryu. 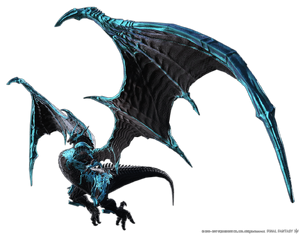 Bahamut in the form of Bahamut Prime is fought in Turn 4 of the Final Coil of Bahamut, as the final boss of the Binding Coil storyline.

In the level 58 Summoner quest "I Could've Tranced All Night," the adventurer meditates on the lingering influence of Bahamut's fury at the Carteneau Flats to unlock Dreadwyrm Trance. The level 60 job quest "A Flare for the Dramatic" refines the trance with a finishing move called Deathflare, which is used to eliminate the lesser Ascians serving Lahabrea.

High-level summoners can channel Bahamut's power in the form of Dreadwyrm Trance and Deathflare, the latter based on Bahamut Prime's Akh Morn attack, and at level 70 summon a lesser version of Bahamut, called Demi-Bahamut, to replace their currently active summon for a short period.

Bahamut appears with a Dark-elemental card.

Bahamut appears on a Triple Triad card in the version available via Final Fantasy Portal App.