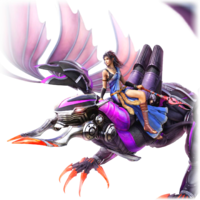 Bahamut is a deep purple mechanical humanoid with draconic features, such as his red claws. In Gestalt mode, he transforms into a flying mechanical wyvern, which Fang can ride. His dragon appearance complements Fang's role as a Dragoon. Odin and Bahamut are the only Eidolons whose transformations are bestial, the others being machines.

The text in Bahamut's summon animation reads (in Latin written in Etro script):

By the grace of Etro emerge from the midnight void. Come forth, master of the rift.
A name in blood, a pact of ruin. Bahamut shall rise, his bond eternal and unyielding.
Shoulder the sky. Enfold the earth.

Bahamut is fought by Fang, Lightning and Vanille in the Fifth Ark's final area called The Apse, where Fang turns against the party when they plan to defy their Focus. She inadvertently summons Bahamut, and after her friends help subdue the dragon, Fang relents and agrees to look for a way remove their l'Cie brands rather than seek to fulfill their Focus. Fang's eidolith manifests as a pink fang-shaped petal that emerges from her brand when she calls forth Bahamut to aid her in battle.

They find an old Pulsian airship and fly it through a portal, emerging in Gran Pulse's atmosphere. The airship is destroyed by a wild wyvern, but Fang summons Bahamut midair and they ride its Gestalt Mode form to the surface. Bahamut is again summoned by Fang when the party returns to Cocoon from heir excursion on Gran Pulse. They crash a grand prix event in Eden and ride through the racetrack with their Eidolons in Gestalt Mode. After Cocoon is destroyed and crystallized, Fang and Vanille stay in perpetual crystal stasis in the crystal pillar's core.

Other Eidolons besides Bahamut are forbidden from entering Etro's temple. After Lightning was erased from history and brought to Valhalla, she defeats Odin to make a new pact with him (as she is no longer a l'Cie), and rides him to Etro's temple where she is challenged by Bahamut. During the fight Lightning loses her weapon, but her moogle companion Mog transforms into a bowsword for her to use to overcome the Eidolon, and Bahamut comes to serve Lightning. Standing before the goddess's throne, a brief oneness with Etro enables Lightning to understand the goddess's isolation and her love towards mankind, and she agrees to become her champion and defend her.

Caius Ballad is an immortal Guardian to the seeress Paddra Nsu-Yeul who has come to Valhalla to kill Etro to bring about the end of the world. He has the power to incarnate summon Bahamut, his version being known as Chaos Bahamut, from his time as a l'Cie before gaining immortality. Lightning defends Etro's temple from him and his Rift Beasts with her army of Eidolons. When she spots Noel Kreiss fall from Etro's gate in the sky, she summons Bahamut to catch him.

Caius keeps incarnate summoning Chaos Bahamut during his various encounters against Lightning, and her sister Serah Farron whom Noel teams up to foil Caius's plans. When the two finally confront him in Valhalla, he splits his being into three, calling forth Jet Bahamut, Amber Bahamut and Garnet Bahamut. Defeated, Caius fades away.

After Fang awoke from her crystal stasis, she no longer has her l'Cie brand and isn't known to have summoned Bahamut. In the dying world of Nova Chrysalia no one ages or can have children, and Caius, despite being killed by Noel, has returned due to his soul having become part of the Chaos itself that erodes the world. When Lightning seeks to save his soul as the savior, Caius retaliates and summons Chaos Bahamut to his side to fight Lightning and prove he cannot die even if he wants to.

The Eidolons aid their former allies in the final assault on the god Bhunivelze. After the end of time and the beginning of a new, god-free universe, the Eidolons disappear to reincarnate, bidding farewell to their former masters.

Bahamut appears before the group in the Fifth Ark, where he is fought by Fang, Lightning and Vanille.

Bahamut yields to those who amass chain bonuses, to those who defend against and endure attacks, and to those who weaken and debilitate their enemies. He inflicts Doom on Fang at the beginning of the battle.

Chaos Bahamut appears as a boss in Final Fantasy XIII-2, as summoned by Caius Ballad. 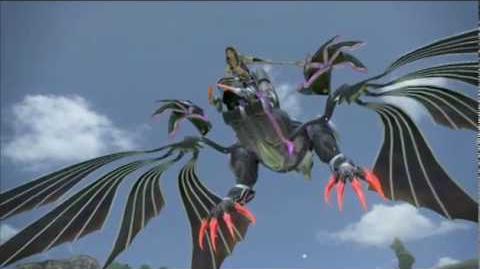 Bahamut uses powerful non-elemental attacks, making him the Eidolon with the highest damage-dealing potential. As Bahamut's SP is rather low, it may be a good idea for Fang to assume the role of Sentinel to increase the summoning time, as well as to boost Bahamut's Gestalt Gauge whenever Fang is attacked while blocking. The more Gestalt Gauge the player can build before going into Gestalt Mode, the more attacks they can get while in Gestalt, and the more powerful Megaflare will be.

Fang's Gestalt Gauge increases by driving up enemy chain gauges, defending against attacks and inflicting status ailments upon enemies. In Gestalt mode, Bahamut allows Fang to ride him. His concept is Aerial Raver.

Bahamut has 5 ATB slots. The Eidolon's rank is the sum of Fang's current Crystarium level and the number of roles Fang has advanced to level 5.

Bahamut targets the same enemy as Fang and uses Dragon Claws three times, followed by Whirlwind, before finishing with Inferno. He will use Umbral Vise on enemies with high hitboxes, Whirlwind on enemies that can be launched, and Ignis on groups of enemies.

While waiting for his ATB gauge to fill, he will pull back from enemies if necessary. If Fang's HP is below 70%, he will cast Curaga. If either her HP or the Eidolon's SP reaches 0, he will cast Arise before being dismissed.

Megaflare raises the chain gauge by a various amount based on level prior to dealing damage:[1] 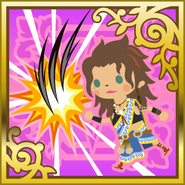 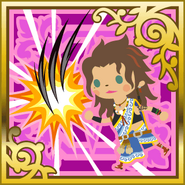 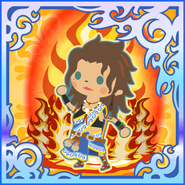 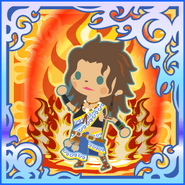 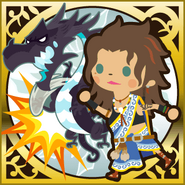 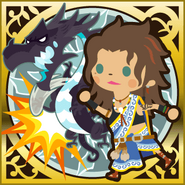 Bahamut is an enemy whose abilities may be imparted to the delegation's units as Soul Break skills.

Bahamut, along with the other Eidolons, has been made into action figures in the Final Fantasy Creatures Kai Vol. 3 series. These figures cost ¥6,240 a piece. 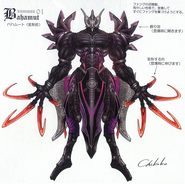 Bahamut appears at the Fifth Ark.