Bahamut is a Terrestrial Avatar from Final Fantasy XI. He is a prominent figure in the Chains of Promathia storyline. Bahamut is one of the few Avatars unavailable for players as a summon.

After Emptiness disrupts the crystal line, Bahamut warns the people of Vana'diel that the Keeper of the Apocalypse's arrival is near. As the Wyrmking, he commands his minions to "let the blood of the gods spill forth on the soil of their creation".

Later, having been sent to Cape Riverne to investigate the sudden uplifting of the area, the adventurer, along with Prishe and Ulmia, arrive at the Monarch Linn and encounter Nag'molada chanting the Memoria de la Stôna. Bahamut appears, identifies Nag'molada as a Kuluu, and discusses with him the oncoming flood of Emptiness, believed to be unleashed by man. After a short battle against guards, Prishe interrupts their conversation. Selh'teus appears, urging that Bahamut's predictions of the end of mankind are mistaken. Bahamut exits.

Much later, the adventurer, along with Ulmia and Tenzen, return to the Monarch Linn to learn the truth of the recent happenings from Bahamut. Bahamut scoffs at their determination, mocking their "incompleteness" as the dream-keeper Diabolos had, and directs the wyrm Ouryu to attack the party.The group forces Ouryu to retreat, but Bahamut still refuses to heed the party's request. Long before he had made a pact with a young boy should the day when the Keeper of the Apocalypse would return. Acknowledging that the time has come, he commands his army of wyrms to gather in preparation for the coming salvation of the land, and leaves the group with a grim message: "Children of the dawn, your end is near!"

A storyline mission available after finishing the first two expansions features Bahamut as a boss.

Bahamut appears as an optional battle after completion of the main scenarios of Final Fantasy XI, Rise of the Zilart, and Chains of Promathia.

It was formerly ranked among the most difficult prior to the level cap increase from 75, not in the least because he summons most of the game's other wyrms to aid him. Ever since an update in which Bahamut gradually builds up resistance to certain types of magic, the number of groups that have defeated his second form has dwindled.

A close up view of Bahamut. 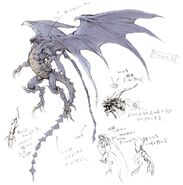 Bahamut attacking the airships of Jenuo.