Fight! You have to!

Bahamut is a boss in Final Fantasy X-2 encountered in Bevelle Underground, and is the final boss of Chapter 2. The party will not pose after winning.

Defeating it in the HD Remaster version earns the trophy/achievement Defeating an Old Friend.

Bahamut's physical attack can be evaded and mitigated with Protect. Impulse is a magic-based attack that inflicts damage on the entire party equal to 3/8 of remaining HP that can be mitigated with Shell. Mega Flare is a powerful magic-based attack that inflicts massive damage on the entire party. The player can use Shell to lessen damage, and Bahamut will count down from 5 to 0 before using Mega Flare.

The recommended party is Alchemist, Dark Knight and Warrior. The party should have a stock of Potions and (if possible) Hi-Potions. The Warrior should know all four Break abilities: Power Break, Armor Break, Magic Break, and Mental Break.

The Warrior should alternate between Power Break and Magic Break to reduce damage the party sustains until she has reduced those stats as far as possible. The Alchemist can repeatedly mix a Potion with a Hi-Potion to create a Mega-Potion. If this is not possible, a White Mage with Shell, Protect, and Curaga will do. Dark Knight should use Darkness every turn.

After the Warrior has reduced Bahamut's Strength and Magic as far as possible, she should begin using Armor Break and Mental Break so the party's attacks will inflict maximum damage. Depending on how much damage the party inflicts by the time all four stats are minimized, the Gullwings may have already won. If not, the Warrior can turn into a Dark Knight and also use Darkness.

The player can also use a special dressphere; Full Throttle is recommended. The player should have the Sinistral Wing raise the Full Throttle's Strength and Defense, cast Haste, and lower Bahamut's stats. Dextral Wing can repeatedly cast Poison Wing—as Bahamut is immune to all status ailments except for Slow, one attack from Dextral Wing is as good as another. Paine should repeatedly use Fiers, which always deals a critical hit. If Sword Dance has been learned this early, it is useful.

This strategy can be easily adapted to the Floral Fallal and the Machina Maw as well.

Another strategy involves using captured fiends, particularly any one of the player-controlled girls paired with a Kukulcan that can use Heaven's Cataract to lower Bahamut's defenses. The girl should be an Alchemist to keep the party alive while the Kukulcan dishes out damage on Bahamut. She can also switch to Warrior to lower Bahamut's Strength and Magic if necessary. The Tonberry is also a decent creature to use due to its absurdly high Strength and great overall stats.

Bahamut is an optional boss in the Fiend Arena and is the strongest aeon. To unlock him in the Battle Simulator, the player must capture and finish the storyline of Azi Dahaka. If all eight aeons are unlocked, the Aeon Cup opens.

To recruit Azi Dahaka to the party, the player must set up an L sized pod in Bevelle.

Bahamut's attacks are much stronger than in the story battle, and he has access to new abilities, such as Shin-Zantetsu and Fireworks. Mega Flare is the most powerful, as it can instantly defeat a low-level party, costing them the match (and the competition during the Aeon Cup). 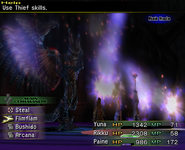 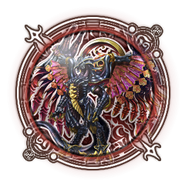