Bahamut is an optional boss in Final Fantasy V. Mentioned in the Sealed Tome along with Leviathan, the party may choose to fight him and obtain him as the Level 5 summon after the first tablet is acquired in the Pyramid of Moore in the Merged World.

Bahamut first appears as a dragon-shaped landform in Bartz's World. The landform is the location of the warp to Galuf's World after pieces of the adamantite are placed in each meteorite.

In the beginning of the Merged World the airship will be inaccessible. When Bartz, Faris, and Krile obtain the first tablet the landform transforms into the dragon and tells the three to meet him at North Mountain.

The airship will land near where the Library of the Ancients used to be. When they make it to the mountain's summit, Bahamut flies over the mountain and the fight starts.

Bahamut uses several Fire and Water-based attacks, such as Atomic Ray and Aqua Breath, and stronger attacks, such as Frost and Maelstrom. Bahamut also uses Poison Breath, which is not as powerful, but inflicts Poison on the party. When Bahamut is running low on HP, he will attack with Mega Flare, a signature attack that can annihilate the party if their HP is below 5,000 or so.

Samurai or Knights should have the Two-Handed ability equipped so they can deal more damage and increase chance of critical hits from the Samurai's katana. Mages should cast protective spells, heal, or cast powerful spells, such as Holy, Flare, or Meteor. Dragoons should use Jump, and Ninjas should throw. Mystic Knights or a member with Sword/Spellblade should have the Two-Handed ability paired with any of the three powerful magic spells, and Summoners should cast Leviathan, Syldra, or Phoenix.

Most of Bahamut's special attacks can be absorbed or nullified by Coral Rings, and any other damage should be healed to full HP. Mega Flare can be avoided if one finishes the battle fast enough, or else casts Reflect or Carbuncle on the party. Even with Reflect, the Blue Magic spell White Wind can be used to heal.

An easy, but MP-costly strategy is to have a Time Mage doublecast Quick and continuously cast Meteor.

An easy fight consists of a Samurai with Sing, with the Masamune equipped. With two other Bards and one damage dealer, using Romeo's Ballad with the Samurai, and then singing again with the other Bards when Bahamut comes out of Stop, prevents him from ever getting a turn.

Another easy strategy is to have two Mystic Knights, a Black Mage and a White Mage. The Mystic Knights should use the Holy Spellblade (or Flare). With Reflect cast on the party, the mages should spam Flare and Holy. 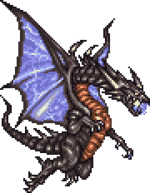 Bahamut appears on the Merged World.

World Map sprite.
Add a photo to this gallery

Retrieved from "https://finalfantasy.fandom.com/wiki/Bahamut_(Final_Fantasy_V_boss)?oldid=3292953"
Community content is available under CC-BY-SA unless otherwise noted.