Have you seen the light...?

Bahamut is a non-elemental optional Guardian Force in Final Fantasy VIII. He is a blue dragon who shoots energy from its mouth. A late-game GF, he doesn't learn any junction abilities naturally, and is the first GF to learn Stat+60% support abilities. He is the first GF in the roster to learn an ability that has the junctioner gain HP by walking on the field, and the only GF to learn Auto-Protect naturally. His unique abilities include the ability to get rare drops from enemies more frequently (although because of the way item drop mechanics work in Final Fantasy VIII the ability can be detrimental), and the ability to create the highest level magic spells in the game.

Bahamut is a steel blue dragon, though the underside of his wings is dark red. He has spikes at the tips of his wings, a long tail, and sharp claws and horns. He is one of the few Guardian Forces to speak to the party.

There is a flashing blue pillar in the middle of the first room. If the core is in the middle of a pulse and the party moves, they enter a fixed encounter against a random enemy formation. When the party approaches the core, a voice asks a question (So you wish to challenge me?). If answered correctly (It's not our will to fight), the party will fight a Ruby Dragon, and if the party wins, the next question (Begging me for mercy?) has the correct answer "Never".

If the party answers correctly they will fight another Ruby Dragon (this battle is an unavoidable back attack), but if any questions are answered incorrectly the party will be warped back to the entrance and they will have to start over again. The player can bring a low health Quistis and use her Degenerator Limit Break to defeat the Ruby Dragons easily.

The trick is that the final question (Damned imbeciles. Why do you wish to fight?) has a hidden answer, below the main two (revealed to be "It's our nature"). Taking the hidden option initiates a battle against Bahamut.

Obtaining Bahamut in the Steam version earns the achievement Bahamut.

Bahamut's Mega Flare summon is a non-elemental attack that damages all enemies and ignores the targets' Spirit stat. Bahamut's summon time is 22.1s, which, according to the Final Fantasy VIII Ultimania, allows the player to boost its damage to around 230% of normal damage using a regular PlayStation controller.

Abilities learned naturally by Bahamut are listed below:

Bahamut's physical attack is Claw Swipe and he uses Stop, Thundaga and Tornado. His special attack is Mega Flare, a non-elemental attack that ignores the party's Spirit stat that Bahamut can cast twice in a row. Bahamut is susceptible to Darkness.

Bahamut is a Level 9 GF Card in Triple Triad used for playing the minigame and for turning into 100 Megalixirs with Quezacotl's Card Mod. The card drops from the Bahamut boss. Because the Deep Sea Research Center is available in the endgame, the player could forgo fighting Bahamut until they can play cards against the Card Club onboard the Ragnarok and win Bahamut's card this way. The player can't have two Bahamut cards if they already got one before fighting him as a boss, however, the card drop from the boss is just never added to the inventory.

Bahamut from Final Fantasy VIII appears as a boss. 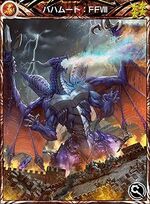