King of Dragons. Elements in his body combine to generate a nuclear fusion blast.

Bahamut is an esper in Final Fantasy VI who can be acquired as a magicite.

Bahamut is similar in appearance to the Bahamut from Final Fantasy V. It is a dark gray/silver dragon with a bronze chest and blue wings. Its PlayStation description calls it the King of Dragons, a title Bahamut has had since the original Final Fantasy.

Bahamut costs 86 MP to summon and casts Mega Flare (Sun Flare in the Super NES versions). Mega Flare deals unblockable non-elemental damage to all enemies, ignoring defense. It has a spell power of 92. Aside from its magicite, Bahamut can also be summoned using the Slot ability by aligning three dragon symbols. Bahamut is the strongest summon for attacking, able to easily hit the damage cap against all enemies.

Bahamut's level up bonus provides a +50% boost to the HP the character normally gains when leveling up. The bonus is of little practical use—the HP boost gained at each level is not notable until the party hits Level 50, where they gain 120 HP, and peaking at 162 at Level 70. This means characters will get only around 50-70 extra HP and would need several levels to gain a noticeable benefit.

If the player wishes to max out the party's stats in terms of HP, Bahamut is the best option in most versions of the game, only being trumped by the Diabolos magicite's superior +100% HP boost in the Game Boy Advance and discontinued mobile/Steam versions.

Bahamut teaches the Flare spell, the only way to learn it outside of Celes at a very high level. If the player can defeat Deathgaze and acquire Bahamut early in the World of Ruin, Flare will prove extremely useful for most of the rest of the game due to dealing non-elemental damage and piercing defenses. Once the party begins to learn Ultima, Flare wanes in utility, but Ultima is available much later and takes twice as long to learn. 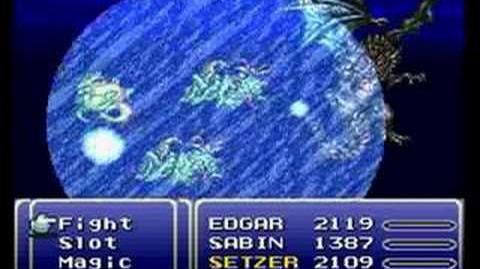