Causes Non-elemental damage to all enemies.

Ten years ago, Garland ordered Kuja to destroy Madain Sari with the Invincible, killing most summoners. A young summoner girl and her mother escaped on a small boat, but the mother died during the long voyage to the Mist Continent. The boat was found near Alexandria, and the girl was adopted by the royal family as she greatly resembled the recently-perished Princess Garnet except for the horn on her head, which the king ordered removed. The girl had lost her memories during the voyage, and grew up as Garnet never learning she was adopted.

After the king passed, Queen Brahne became power-hungry and wanted to conquer the Mist Continent with the aid of eidolons extracted from Garnet and with a new army of black mages. Her eidolons stolen from her, Garnet escaped Alexandria Castle with her new friends, took on the alias "Dagger", and traveled to the Outer Continent to look for Kuja, who had supplied Brahne with the knowledge of eidolons and black mages. While on the Outer Continent, Garnet learned about her true identity and saw Bahamut's as a mural on the Eidolon Wall.

Brahne took the Alexandrian navy to the Outer Continent in search of Kuja, having deemed him a rival now that she already had the power of eidolons in her grasp. The navy met Kuja off the coast of the Iifa Tree, and Brahne used a garnet to summon Bahamut on Kuja. The dragon manifested, but Kuja used the Invincible to enslave and steal it, and turned it against Brahne. Despite Garnet's efforts to stop him, Bahamut blasted Brahne's ship to pieces and the dying queen washed ashore where she could impart her final words to her adopted daughter.

Garnet became queen, and inherited most of the jewels into which her eidolons had been extracted, bar the garnet Brahne had used on her final moments. Kuja came to Alexandria and summoned Bahamut to lay waste to the town and the castle to test the eidolon's power, hoping he had discovered something powerful enough to use against Garland. Garnet watched from Alexandria Castle in horror as Bahamut torched the city. Her crystal pendant reacted and she heard the summoner's call, and climbed to the top of the castle where she was met by Eiko Carol. The two summoner girls brought Alexander's divided summoning gem fragments to one place, and called forth the megalithic angel-winged fortress that blasted Bahamut to pieces with divine light. Kuja was at awe at Alexander's power and called upon the Invincible to enslave it, but Garland arrived aboard it and used the battleship to destroy Alexander in lieu of Alexandria Castle. Kuja, having lost Bahamut, departed Alexandria to look for an eidolon more powerful than Alexander.

After Cid Fabool IX finished building the Hilda Garde III, Garnet went missing. Zidane looked for her in Alexandria and ran into Beatrix, who gifted him a garnet to give to the princess. Zidane found Garnet at her mother's memorial, and gave her the gem, allowing Garnet to learn to summon Bahamut.

Bahamut is a dragon with dark purple wings and a black scaly body with a bronze-colored underside. It has large horns and a long tail. It is a flying eidolon. Though it is not fire-elemental, the energy it shoots from its mouth sets the ground ablaze, as seen during the Battle of Alexandria. It has large claws at the tips of its wings. As opposed to the Terran plumed dragons, Bahamut has a scaly body and leathery wings, like those of a bat.

Bahamut is Garnet's original ultimate eidolon, though the secret eidolon Ark learned from a Pumice later surpasses it. Garnet already had Bahamut before losing her eidolons, and Brahne and Kuja both seemed to recognize it as the most powerful eidolon stolen from the princess, as Brahne decided to use it to kill Kuja, and Kuja contemplated using it to defeat Garland. Bahamut's jewel is a garnet, the princess's namesake, and the birthstone of January, the month Princess Garnet was born. However, the princess in Final Fantasy IX is not actually the original Princess Garnet, and so connection is more of a meta element than based on lore.

Bahamut costs 224 MP to summon before Garnet/Dagger loses her eidolons, and 56 MP after learned from a piece of Garnet for 80 AP. One Garnet is obtained as part of the story from Beatrix just as the Hilda Garde III becomes available, and more are available from synthesis in Daguerreo, Black Mage Village, and Hades in the endgame (requires 350 gil, Ore, and Remedy). Garnets can be found in the Outer Island chocograph treasure (x16) and one is found in Alexandria after the battle there. They drop from Abadon and Stilva, and are stolen from Abadon and Chimera.

The formula used to determine the amount of damage an eidolon does during its full animation is as follows:[1]

Bahamut is an especially useful eidolon against enemies weak to magical damage, and is good to summon against most enemies as long as Dagger has the MP to spare. Summoning Bahamut earns the King of Dragons achievement in the mobile and Steam versions.

Bahamut has an eidolon-type card for Tetra Master, which can be won late into the game from the Eidolon Master in the card stadium in Treno. 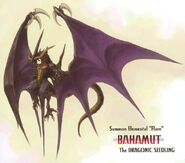