Non-player character
Bahamut is the King of the Dragons in the original Final Fantasy. He lives in a subterranean network underneath the Cardia Islands, and grants the class change to the Warriors of Light after they bring back a token of their courage, the Rat Tail, from the Citadel of Trials.

Bahamut is one of the Warriors of Light in the Final Fantasy manga by Yuu Kaimeiji. 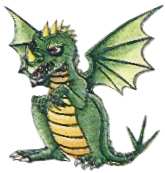 Artwork of Bahamut and the Warriors of Light from the Nintendo Power strategy guide.

In modern times, the game Dungeons & Dragons is responsible for reimagining Bahamut as the king of dragons, a benevolent Platinum Dragon; the opposite of the malevolent Tiamat, the five-headed Chromatic Queen of Dragons.