Episode: Tale of a Giant

Boolatoon
Bahamut is a neutral-elemental Eidolon from Final Fantasy Dimensions II. Bahamut can be obtained as a signet for Morrow to equip as the completion reward for Morrow's final character episode, "Tale of a Giant".

Bahamut is one of Morrow's stronger signets, providing Morrow with his strongest boost in magic and HP, while having balanced attack and speed stat boosts. The signet's passive of decreasing ability activation delay by 25% allows Morrow to activate his abilities faster in battle. If obtained early in the post-game, the signet's Flare Breath abilities can be helpful in dealing heavy damage to enemy groups in Babil Tower and fighting dragon-type bosses.

Bahamut's artwork depicts Mootie as the Eidolord in his most powerful form. The summon's overall design depicts Bahamut as a massive black scaled dragon with massive wings, similar to his appearance in Final Fantasy VII and Final Fantasy IX. The signet's final artwork depicts Bahamut with gold ornamentation around his body and preparing to unleash his Megaflare attack. In addition, he has a massive gold wheel behind him, similar to the summon's appearance in Final Fantasy X.

In the original free-to-play versions, Bahamut was the fifth Bahamut-type signet introduced to during the last few months of the game's time as Final Fantasy Legends: Toki no Suishō. Bahamut's signet could only be obtained from the game's summon draw shop.

This version of Bahamut was a neutral-elemental god-tier signet that allowed those equipped with the signet to use Megaflare Ζ-Ω abilities and had the Max HP + 20 - 40% passive abilities. Bahamut was a SSS signet and required god stone materials to upgrade.

Due to the premium version of the game removing the original Bahamut signet first introduced in Final Fantasy Legends: Toki no Suishō, this version of Bahamut only remains. In addition, its Megaflare attack was renamed to Flare Breath, although the animation remains the same. 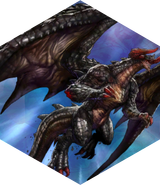 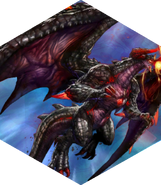 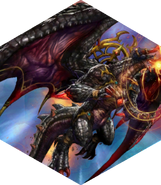 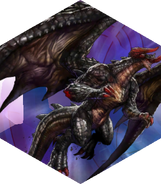 In modern times, the game Dungeons & Dragons is responsible for reimagining Bahamut as the king of dragons, a benevolent Platinum Dragon; the opposite of the malevolent Tiamat, the five-headed Chromatic Queen of Dragons.