Bahamut is a recurring non-playable character in the Chocobo series. Bahamut is a dragon who gives guidance to the protagonist Chocobo.

This section about a character in Chocobo no Fushigi na Dungeon is empty or needs to be expanded. You can help the Final Fantasy Wiki by expanding it.

A mystical dragon with great powers and fortitude. He only provides aid to those who have his approval. His presence is shrouded in mystery.

Bahamut introduces himself as the King of Dragons and the Keeper of Time. He is met while investigating Cid's tower and relays cryptic information regarding the strange behavior of the imps inhabiting the tower, the presence of a higher power and the existence of a mysterious girl to Chocobo and Cid. He knows what has happened in the past, present, and future, and he was the one who revealed the origin of the Glass Goth. In-game, he is the strongest "feather" summon, which annihilates enemies with his devastating Breath attack.

In Chocobo's Mystery Dungeon: Every Buddy, Bahamut makes a cameo appearance first as the boss of the Genius Inventor's Memories who far outclasses all the monsters in the dungeon. He is later found at the Empty House in the Residential District with Shiroma and Cid. Clearing his dungeon unlocks his buddy for use.

Bahamut is the final boss. He lives in Fantasia, the realm of the Espers, legendary "Beasts of Illusion". Bahamut the King of Espers and the Mysidian magician Ming-Wu saw that the Magicite causes much warfare in the world and to avoid conflict, the Magicite was split into eight pieces and scattered around the world. Chocobo must prove his world and Fantasia can coexist by beating Bahamut.

Bahamut hovers above the track with speed equal to Goblin's and better acceleration than Black Magician's. His ability is Megaflare, a slow-charging unblockable attack that hits all racers and stalls them. His theme is a combination of the remixed versions of the opening of the fourth section of "Dancing Mad" from Final Fantasy VI, and "Sealed Book" from Final Fantasy V.

Bahamut is a non-element card, and he has six cards under his name.

Bahamut is a duel boss in floors 41 and 45 of the Guardian of the Dark dungeon and as a secret superboss in the 99th floor Chocobo's Memories dungeon, which is playable after the credits roll.

When summoned by the magicite, Bahamut uses Mega Flare to deal massive damage on enemies within a three-grid radius. 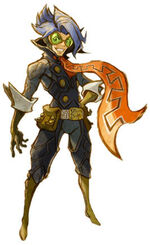 Bahamut appears as a human version and is one of the characters to appear in the third Alvanica book, "The-Sky Flying Twins". He is the professor of Raffy and Elly. He helps Chocobo and Raffy rescue Elly from Deathgaze and Omega.

In Chocobo GP, Bahamut is voiced by Andrew Morgado in English and Takuya Nakashima in Japanese.