The Dragon King. Ruler of the heavens. The fortress of the skies... Bahamut is known by many names, but if you had to pick the simplest way to describe him, it would be... The strongest of all espers.

Bahamut is a character in Final Fantasy Brave Exvius and a member of Hess' Eight Sages. Sealed by the Fire Crystal, he is known as the strongest of all espers and can be acquired at the Realm of the Dragon King once the player completes all of Season One and speaks with Evan at Downtown Zoldaad.

Unlike other espers, Bahamut does not give the equipped unit other than increased stats, and evoking him for his Megaflare is considered one of the best available "finisher" moves (i.e. its attack will hit at the end of a chain for increased damage) in the game, especially when used by a "summoner" unit like Garnet.

Bahamut is a large black, draconian monster. He has a more humanoid shape following more recent depictions of the Esper, rather than his more classic, serpentine appearance.

It is said that Bahamut not only is the strongest of all Espers in terms of power but also in terms of intelligence. Bahamut has lived for several centuries and has come to meet many people. Be it for arrogance, or because he acknowledges the importance of his own power, he only lends his strength to causes he deems worthy and to individuals nothing short of having immensurable strength.

After being sealed for 700 years, he has memory loss and doesn't recognize other fellow Sages, although he does have some recollections of previous events.

Bahamut was an Esper in the world of Paladia being known as the strongest of his kin. When war erupted between Aldore and Hess for the latter's independence, Hess' army was considered the weakest but was successful in recruiting a vast number of Espers to their side, including the Dragon King himself. Because of his power, Bahamut was given the rank of Sage, although it is not known whether Bahamut joined after many Espers did so, or Bahamut somehow coerced his comrades to join Hess.

As the war dragged on and casualties were increasing on both sides, the first Veritas of the Dark decided to end the war by sealing the Sages into Crystals and along the Sworn Eight of Paladia, become the leverage power in order to force negotiations to allow Hess' independence. Around this time, Bahamut from his own point of view, believed that humans reducing their already short lives to nil in the savage war was absurd to the point it is said he attacked both enemy and ally in disgust.

Nonetheless the sealing succeed and Bahamut was defeated and sealed into the Fire Crystal. However the leaders of Aldore, fearful of their lieutenants, betrayed them by forcing the landmass of the battlefield to be transported to Lapis expelling a significant amount of people to another world. The Sages' themselves were by proxy also transported.

Bahamut remained dormant for 700 years in the Fire Crystal and eventually under the possession of the Zoldaad Empire who would use the Crystals power to increase their military might. The side effects of the seal would give him partial memory loss.

When Rain and his friends are successful in repelling Veritas of the Dark and Veritas of the Flame and protect the Fire Crystal from them, Jake deciding to prioritize his people's safety, destroys the Crystal to weaken the Empire. This act releases the Dragon King, whom Fina is able to sense although barely remember. Although the party chastises Jake for his decision, he stands by his choice as he believes the Empire to be a more imminent threat than Bahamut is at the moment.

When Rain and his friends defeat Sozhe, and pursue Dr. Lazarov who manages to get into The Invincible, the mad scientist attempts to use the airship against them. However Bahamut senses Babil's Heart inside and challenges the Airship, blasting it with a Megaflare and causing enough damage to force Lazarov to hide and repair it.

Bahamut flies away afterwards, but his strength would be able to project a Vision of him that Rain and his friends would eventually encounter.

Realm of the Dragon King[]

After the battle with Sol and the Chaotic Darkness, Lasswell and the rest of the party, returned to Zoldaad where they are informed by Evan of a dimensional distortion that was monitored and a floating island where normal airships cannot travel due to the strong storms. The Invincible however can ride the winds and the party decides to investigate.

In the island Fina senses that Bahamut has made his lair somewhere and that his presence has caused rifts in the space, spawning the land which is in fact a vision filled with visions. The party comes to find a vision of Rain manifested by their emotions, who guides them towards the Dragon King. Since he could be a great ally to have the party reasons they should try convincing him to join their cause of retrieving Rain.

Atop the Eternal Summit where Bahamut resides, he spots Fina but doesn't recognize her due to his amnesia. Lasswell requests his help and he in turn asks their purpose. Lasswell responds they are guided by an intense feeling of saving someone dear to them, and that they will fight so that nobody else is sad. Bahamut scoffs this as insignificant, and recall he has fought for much more greater causes and has met people of far better status than he sees on the party. Lasswell challenges him in order to show the Dragon King the strength of the emotions he is looking down upon.

After a difficult battle, Bahamut recognizes that the party's emotions are genuine and that no matter the dimension he is in, those emotions are always the strongest thing to be found. The party requests his help in order to retrieve Rain who is important to them. The Dragon King then gladly accepts joining their cause.

In order to be acquired, Bahamut must be defeated first. And in order to fight him, the player must navigate through the Realm of the Dragon King (available to explore after finishing Season One) and set Tent as bases (which serve as checkpoints) to continue all the way up to the Eternal Summit. In addition, the player must set the Rat Tails collected from the different Shadow Bahamuts in their Item list, as one is required to open the path to Bahamut.

Bahamut is the strongest Esper found in the game, even at 1★ his strength surpasses that of Espers in their higher levels. He takes much longer to level up than other Espers and has no preference for any kind of Magicite. He is, however, highly sought as he vastly increases all Stats when equipped and his Megaflare Summon Attack is strong enough to deal massive damage, especially when capping it on a high chain count.

The battle against the Dragon King can be likened to a high-difficulty trial at the Chamber of the Fallen, as he has 14,000,000 HP and may knock out the entire party on the very first turn with his Megaflare and his other skills. Furthermore, the player cannot use Lapis to continue should the party be defeated.

A much easier to defeat version can be found in the Shadow Bahamuts which roam Bahamut's realm (which in a given run of the Realm of the Dragon King, amount to 7), and which were the featured enemy of the raid Vision of Bahamut and its trial. 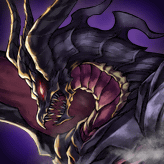