Bahamut's Lair, also known as Cave of Bahamut, is an optional dungeon in Final Fantasy III on the Floating Continent.

The cave itself is located to the southeast of Vikings' Cove, but the player must cross the mountains to the east of Bahamut's Lair on the Invincible to reach the entrance. The party can fight Bahamut here to obtain him as a summon. The player must travel through the cave and find the exit, which will take them to a part of the world map that is inaccessible by airship, where they will fight Bahamut. 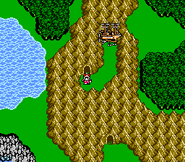