Bafsk is a town from Final Fantasy II, used as the construction site for the Palamecian Dreadnought.

The Dark Knight was in charge of the creation of the Dreadnought, but due to the loss of possession of Mythril he was summoned to Palamecia and was replaced by Borghen. This caused the construction to slow down, since the Dark Knight actually hypnotized the villagers, something Borghen could not do.

Firion and his friends, together with Minwu, attempt to sabotage the creation of the Dreadnought by sneaking through Bafsk's sewer system, with the help of a Wild Rose Rebel, but they are too late: the Dreadnought was already complete when they entered the town. It takes off and launches attacks on the cities that have sided with the Wild Rose Rebellion.

The Background Music that plays in Bafsk is the Final Fantasy II "Town" theme. 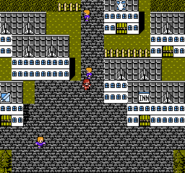 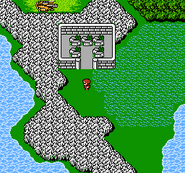 Bafsk on the World Map (NES). 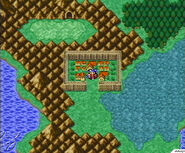 Bafsk on the World Map (PS).