A mystical draught said to spout forth endlessly from an enchanted fount. Only consumable by knowledgeable salve-makers, it brings out the latent powers of the drinker, allowing them to exceed their normal physical capacities. As a side-effect, however, it induces obliviousness to one's surroundings and a loss of control, as if the imbiber were in a severe state of inebriation.

Bacchus's Wine (バッカスの酒, Bakkasu no Sake?), also known as Bacchus's Cider or Bacchus Wine, is a recurring supportive item in the Final Fantasy series. It gives the user a status, usually Berserk.

Wine that raises Attack at the cost of lowering Evasion.

Wine with the same effect as Berserk

The Bacchus Wine inflicts Berserk on one target.

Though not usable outside of battle, Bacchus' Wine is a Mix result, achieved by mixing a Holy Water and Turtle Shell, and gives the target the Berserk status.

Cause one ally to mindlessly attack with weapon in hand.

In the original version, Bacchus's Wine has 50% chance of inflicting the target with Berserk. It can be purchased from all shops for 120 gil after reaching certain points in the story.

Three can be obtained from the bazaar by selling Tyrant Hide x2. Two are given as a reward for defeating the Elite Mark Behemoth King. One is given as a reward from Montblanc for defeating Fury. Varying amounts can be won as prizes from the Balfonheim Port Footrace. It drops from Great Malboro, Serpent, Necrophobe, Cassie, Reaver, High Reaver and Bangaa Pirate. It can be stolen from Bomb, Danbania, Bull Danbania, Hybrid Gator and Gizamaluk. It can be poached from Wyvern and Bell Wyvern. It can be found in treasure coffers in the Mosphoran Highwaste.

The "Behemoth" class enemies are fond of using the item to inflict Berserk on themselves, making their attacks even more devastating.

In the Zodiac versions, the item is guaranteed to inflict the Berserk status to the target unless the target is immune to it, making it effective against enemies that spam spells, like Ixion.

Bacchus Wine is a legendary wine made from Bacchus grapes, a hybrid of various grape species. The Calamity nearly eradicated the wine, grapes and all, and only a few bottles remain. Having been struck blind in a battle with Titan, Shamani Lohmani found renewed purpose upon tasting the wine, and now devotes his life to wine making. It appears as a key item in the quests

It Was a Very Good Year and

Bacchus Wine is not an item, but is mentioned in the errand "Lilith's Libation":

Bacchus Winery's most popular product is Bacchus Liqueur, an incredibly sweet drink made from bacchus seeds, ad it was the reason for the attacks on the company's wains. What was thought to be the work of bandits was actually that of monsters drawn to the sweet smell. We defeated them and their leader Lilith, ensuring that Ivalicians could again partake in Bacchus's blessing.

A fiery drink of a man known as the God of Spirits in the Age of Myths. It causes the imbiber to fly into an uncontrollable rage and attack all opponents.

Bacchus's Wine has a 100% chance to apply the berserk effect to target. It can be purchased for 500 pg. It can be found in Grandship, Grapp Keep, Starkfort, Engine Room, and Eternian Central Command, and dropped from Barbarossa (ch 5, 6, 7).

Bacchus's Cider increases all party members' Strength by 15%, and it can be obtained in Battle Music Sequence (BMS) only. It is obtained randomly after completing a Music Stage.

Bacchus's Cider is an item that can be equipped or used manually (Quest Medleys only). It is used at the beginning of the Music Stage and increases party members' Strength by 15%. When used in Quest Medleys, the effects are triggered when the next stage begins and increases party members' Strength by 15%. It is obtained randomly after completing a Music Stage.

Bacchus's Wine increases the entire party's strength by 10. It can be dropped by defeated monsters. 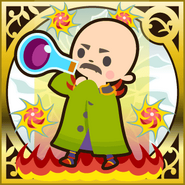 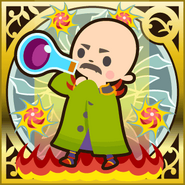 In Japanese the item is called Bacchus's Sake. [view · edit · purge]Sake is an alcoholic beverage of Japanese origin that is made from fermented rice, and is sometimes referred to as as a form of rice wine by English-speaking countries, although technically sake is closer to beer than wine.