Cid Pollendina: Oh, shut up and help me remodel the Baaj page!
Please expand this article into a full one. The following tasks need to be completed:

Baaj, known as the Submerged Ruins (海の遺跡, Umi no Iseki?) during the first visit, is a mass of ruins off the mainland of Spira, situated south of the island of Bikanel in Final Fantasy X. Baaj is the first explorable location and is critical to understanding the emotional development of Maester Seymour, one of the game's major antagonists.

Baaj was a great island city before an attack by Sin destabilized the underlying geology. Most of the city collapsed into the sea, save for a series of interconnected ruins surrounding the temple. Baaj Temple is the only remaining building on the archipelago, though it is in poor structural condition. The entrances are submerged conduits, only accessible by swimming through fiend-infested waters. As a former temple of Yevon, it shares the style and iconography with the other temples, but the Cloister of Trials and the main antechamber have been lost to the sea.

To access Baaj Temple, the player must acquire the Fahrenheit and talk to Cid and access the coordinate option. Baaj is found by searching for coordinates X=11-16, Y=57-63. Visiting Baaj is needed to recruit the aeon Anima. Baaj is inaccessible in Final Fantasy X-2.

Twenty-eight years before the beginning of the Eternal Calm, Jyscal Guado and a human woman bore a son named Seymour. The Guado, intolerant of other races, were angered by the perceived blood-treason and threatened rebellion, especially since three years after his son's birth, Jyscal became the leader of the Guado. To secure peace for all parties, Lord Jyscal had his loyal follower, Tromell, took his wife and son to Baaj Temple for their safety when Seymour was eight years old.[1] Two years later, after his mother became a fayth for his sake to earn the trust of the humans and the Guado alike, Seymour received her aeon, Anima, but never used it to battle Sin like his mother had wished and returned to Baaj alone.

The Guado's internal strife subsided during High Summoner Braska's Calm, and the 18-year-old Seymour was summoned back to Guadosalam, where he assisted his father in the duties of a Yevon priest.[1] The Guado became followers of Yevon and Jyscal was made a maester.[1] When Seymour was 25, he was made the maester of Macalania Temple, and had the body of his mother, now the fayth of Anima, secretly relocated to Baaj Temple, where he sealed her up.[1] Seymour frequented the temple, and during these visits began to formulate his nihilistic plan for Spira. Shortly after Seymour left Baaj for the last time, the temple was attacked by Sin and reduced to a scene of dank desolation.

Ending up in Baaj after being separated from Auron when Sin whisked them away from Dream Zanarkand, Tidus explores the ruins and is attacked by Sahagins before barely escaping Geosgaeno and ending up in a ruined chamber in the temple. He is rescued from a fiend attack by Rikku and her Al Bhed salvage squad.

The party can return to Baaj after obtaining the airship to defeat Geosgaeno and access the temple. They can undo the seal on Anima by collecting Destruction Spheres from the other temples of Yevon. Upon entering the Chamber of the Fayth, the party talks with the spirit of Seymour's mother about Seymour's lonely childhood. Seymour's mother grants Yuna the ability to summon Anima in the hope she can save Seymour from himself.

The player has to open the treasure chests in each Cloister of Trials of the six main temples (Besaid, Kilika, Djose, Macalania, Bevelle, and Zanarkand) to break the seal which guards the entrance to the Chamber of the Fayth.

The antechamber shows off the aeons' glyphs. A pattern corresponding to each aeon lights up behind each statue once a Destruction Sphere has been used in the corresponding temple to open a hidden treasure chest. Anima's glyph flashes whenever the player finds a special chest in the other temples. Each Destruction Sphere sphere has an elemental-sign, and the matching aeon's summoning glyph lights up behind the statue when it is used on a pedestal in Baaj.

If the player did not get the hidden treasures from Besaid and Macalania Temples in the PAL, International and HD Remaster versions, then they will have to defeat Dark Valefor and Dark Shiva, respectively, to revisit the temples. This can be done after gaining the airship and completing the mandatory visit to Bevelle.

"Out of the Frying Pan"

"Creep" plays in the Submerged Ruins, a slow and dark track. "Out of the Frying Pan" plays during the time Tidus is trapped in Baaj Temple. "Leap in the Dark" plays when the Al Bhed capture Tidus.

The floors and walls have numerous inscriptions of words in Spiran script, such as "Semour"[sic], "Jyscal Guado", "Fire", "Flower" and "Guadosalam".

Despite the only entrance to the temple being an underwater passage, which only Tidus, Wakka and Rikku can get through, the rest of the party appears at the fayth anyway.

Geosgaeno has a 50% chance to drop a missable weapon with the No Encounters ability, which is otherwise exclusive to armor. It may be two or three slots.

As the symbols around the elevator leading to the final area of Zanarkand Dome show the glyphs of Besaid, Kilika, Djose, Macalania, Bevelle and Baaj Temples of Yevon, it can be assumed that Baaj Temple used to be a pilgrimage destination for summoners before being lost. 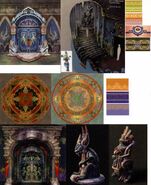 Artwork of Tidus swimming through the ruins.

Hallway to the Chamber of the Fayth.