Ba'Gamnan has two brothers, Gijuk and Bwagi, and a sister, Rinok. They help him in finding his bounties, and in battle provide useful status buffs. They are almost as cruel as he is, but follow him out of fear. 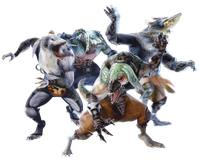 Though he survived the fall into the sandsea, the Empire saw no more need for the bangaa's services and placed a bounty on his head. Ba'Gamnan is looking for revenge and he and his siblings come across Vaan attempting to steal a derelict airship. They corner Vaan and his friends Kytes and Filo, but using the auracite Balthier gave him, Vaan summons some Yarhi to help him. The tables turn, and the party fights back. Ba'Gamnan is defeated, and his brothers and sister run away.

Upon reaching the derelict's bridge, Ba'Gamnan tries to attack Vaan only to trip up on the stairs as the airship activates. Knowing he would cause nothing but trouble, the party ties him up.

During the fight with Titan, Ba'Gamnan rushes into the room to help the party. Not knowing what is going on, Tomaj appears and explains he has fitted Ba'Gamnan with a muzzle, called Ba'Gamnan's Bane, that they can use to shock him. Ba'Gamnan joins the party unwillingly, and after leaving the Auralith's Cradle, the party encounters Ba'Gamnan's siblings. Claiming they are fed up of his old-fashioned ways, they announce they are leaving him and attack, but are soon put down by Vaan's party.

At Port Marilith Ba'Gamnan abandons the party. Not wanting to bother him, the party leaves him behind. When they reach the Yapih Caverns, the party is attacked by Ba'Gamnan's siblings, but before they can reach them, Ba'Gamnan appears and takes out his own family. The party defeats the enraged bangaa, but as they approach his body he gets up and kidnaps Filo.

In the Underfane Of Yaxin Qul, Ba'Gamnan is holding Filo hostage. With the help of Rikken and company, the party takes down the bounty hunter. During the Muruc Cashuac Skysea's destruction, Ba'Gamnan escapes. He finds his brothers and sister and beats them, forcing them to come back to his side. His next plan involves his siblings to create a distraction for Vaan's party while some hired goons try to kidnap Fran. Vaan figures out the plan and saves Fran in time.

Ba'Gamnan is fought at the Lhusu Mines and as the Elite Mark posted by Montblanc. He is fought alongside his siblings.

Ba'Gamnan acts similar to the Dark Knight, able to inflict status ailments as well as sacrificing his HP to inflict damage to an enemy. He can also learn, after a lot of training, magicks like Bad Breath and Souleater.

While Ba'Gamnan is a playable character, he learns various unique skills. Ba'Gamnan has no Quickening.

Ba'Gamnan is fought multiple times and is once again fought with his siblings.

Ba'Gamnan's theme is "A Speechless Battle" (言葉無き戦い, Kotobanaki tatakai?) that plays during fights with him in Lhusu Mines and in Nam-Yensa Sandsea in Final Fantasy XII.

Boss sprite.
Add a photo to this gallery 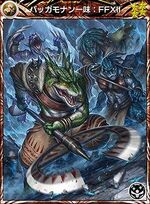 Ba'Gamnan from Revenant Wings.
Add a photo to this gallery